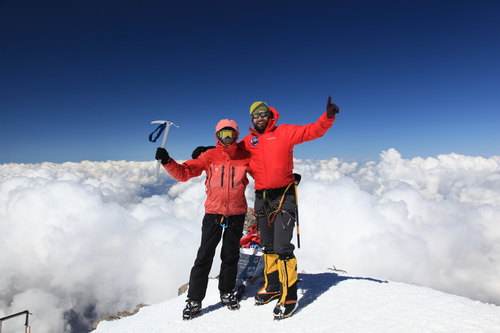 Our high camp on the north side is above 8,000m in the Death Zone, where oxygen levels fall to 30% of sea level values

Cambridge, March 17, 2017 – Scotsman Ricky Munday, 40, today announced that he is making final preparations to climb the North Ridge of Everest in Tibet, from 6 April to 4 June. He is undertaking the two-month expedition to climb the world’s highest mountain (8,848m) in memory of his twin uncles, who were supported by Macmillan nurses in their home, surrounded by family. Munday has been planning the expedition for over a year now and has secured significant financial support to help finance the cost of the expedition. Adventure travel company Wild Guanabana is the main sponsor, providing funding and satellite communication capability that will allow Munday to post photos and updates on social media directly from Everest. Omar Samra, who is the first Egyptian to climb Everest, to reach both the north and south poles and to complete the Explorers Grand Slam, founded the Wild Guanabana in 2009.

A British team led by George Mallory in 1921 first attempted Everest’s North Ridge route – they reached the North Col at 7,003m, which is now the normal site for Camp 1. A 1924 British expedition with Mallory and Irvine is most notable for the mystery of whether they summited or not - Mallory’s body was found in 1999 it is still uncertain whether he reached the summit. Sir Edmund Hillary and Tenzing Norgay climbed Everest for the first time from the South via Nepal in 1953.

‘This will be the most challenging expedition I’ve ever attempted and I’m excited to be following in the footsteps of pioneering British mountaineers’ said Ricky Munday from his home in Cambridge, where he works as Head of Corporate Services at the British Antarctic Survey, the UK’s national polar science and operations organisation. ‘Overall, the north side of Everest has more technical difficulty than the south side, although fixed ropes and adders are placed on the three most difficult sections, and the north can be significantly colder and windier. Our high camp on the north side is above 8,000m in the Death Zone, where oxygen levels fall to 30% of sea level values.’

To prepare for this expedition, Munday has spent the last decade organising and completing fifteen expeditions to the world’s greater ranges – he has climbed four of the seven continental summits and reached a maximum altitude of 6,962m on the summit of Aconcagua, the highest peak outside of the Himalayas. He has climbed on some of the world's most iconic peaks, including Mont Blanc, Kilimanjaro, Mount Kenya, the Matterhorn, Aconcagua, Elbrus and Damavand. He has also trained extensively in the Scottish Highlands and the mountains of Snowdonia in North Wales.

After flying into Lhasa and travelling 900km overland to Chinese basecamp (5,200m), Munday will spend six weeks slowly climbing up the mountain to set up and stock the higher camps and to acclimatise fully, before descending back down to base camp to rest and recuperate. He’ll then spend up to seven days climbing back up through the camps to make his final summit bid.

Munday is no stranger to hardship. He completed the Marathon des Sables, a 150-mile ultramarathon in the Sahara desert known as the ‘toughest footrace on earth’, in 2004. He was a humanitarian aid worker for six years between 2008-2014 working in conflict zones and the aftermath of natural disasters, completing missions to Sudan, Bangladesh, Pakistan and Haiti. On his Everest expedition, Munday is also acting as an ambassador for Finding Your Feet (FYF), a charity established by Corinne Hutton, who fell seriously ill with acute pneumonia and septicaemia in 2013. She was truly fighting for her life. She fought bravely – and survived against the odds – but surgeons were forced to amputate both hands and both legs below the knee. She founded Finding Your Feet to help others faced with amputation or limb deficiency, and runs clubs in a variety of sports, including climbing, cycling, football and swimming.

Munday explained how Corinne’s bravery will inspire him: ‘When I’m high on Mount Everest in the Death Zone on summit day; the temperature is 20 degrees below zero; it’s pitch black; I’m cold, tired and hungry; my lungs are gasping for oxygen; each footstep requires a huge effort of will; at the moment when I think I’ve reached my limit and want only to give up, I’ll think about Corinne. I’ll steady my breath. And I’ll take another upward step’

A Chartered Accountant, Munday also had a successful club rugby career in Scotland with Glasgow Hawks, winning three consecutive national championships and winning the Scottish Cup twice. He now harbours an ambition to climb the Triple Seven Summits – the three highest peaks on each continent – a feat that has only ever been completed once before.

For further information, photographs or to request an interview with Ricky Munday, please contact:

NOTES TO THE EDITOR:

MACMILLAN CANCER SUPPORT: Macmillan provides specialist health care, information and financial support to people affected by cancer. As well as helping with the medical needs of people affected by cancer, Macmillan also looks at the social, emotional and practical impact cancer can have, and campaigns for better cancer care. Their goal is to reach and improve the lives of everyone living with cancer in the UK. Ricky is fundraising for Macmillan on his JustGiving page and has raised over GBP 2k to date: JustGiving

FINDING YOUR FEET: FYF provide a wide range of support to individuals who have been affected by amputation or limb difference, through sporting initiatives and social inclusion projects. https://findingyourfeet.net/

WILD GUANABANA: WILD GUANABANA (gwuh-nah-buh-nuh) specialise in designing and creating authentic and ethical adventure travel experiences in wild and wonderful destinations around the world, in a manner that is professional and adhering to the highest levels of safety guidelines. The company was founded by Omar Samra, the first Egyptian and youngest Arab to reach the top of Mount Everest. They work with individuals, schools and companies to deliver unique experiential programs in 15 countries across 6 continents. http://www.wildguanabana.com/

CROWDFUNDING: Ricky is offering individuals the opportunity to support his expedition directly to offset his GBP 31k expedition costs. Individual sponsors can benefit from a range of rewards, including signed posters, a satellite phone call from Everest, or a motivational talk at an organisation of the supporter’s choice: Crowdfunding