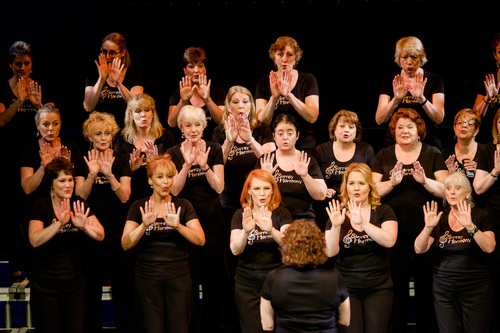 This is our first legacy for Choiroke and we look forward to supporting other local community projects in the near future.

On Saturday June 10, 2017, seven of the finest choirs from across Surrey and Sussex came together at the Harlequin Theatre in Redhill for BRAVO’s seventh Choiroke concert.

Choiroke is produced annually by BRAVO, which is led by Louise Camby and Rebecca Holloway, a Surrey-based, not-for-profit social enterprise that operates from across Surrey and Sussex. BRAVO is a team of volunteers who donate their skills and experience.

The Musical Director for Choiroke 2017 was Sean Peters, based in Purley, who also leads the Sowden Singers who performed on the night.

Making their debut performance at Choiroke, after only nine weeks of singing together, was the SASH NHS Community Choir. The choir was launched as part of a project to promote health and wellbeing in the workplace to bring the SASH Trust Workforce and the local community together.

The relaunch of the SASH Choir was made possible by team BRAVO with funds generated by last year’s Choiroke event. Epsom based, Louise Camby from BRAVO and the creative producer of Choiroke said, "This is our first legacy for Choiroke and we look forward to supporting other local community projects in the near future."

The all-inclusive aspect of music and song was beautifully represented by The Include Choir. The choral group was founded in 2016 by speech and language therapist and musician, Alix Lewer, with the aim of promoting social inclusion, giving voice to people with learning disabilities and raising awareness of the need for inclusive communication.

Alix Lewer, based in Redhill said, “We use Makaton signs, objects, pictures and easy words to help everyone understand and share our message.”

Also performing on the night was multi-award winning local chorus, Surrey Harmony, a women’s a cappella chorus established more than twenty-five years ago. They have won the Sweet Adelines UK championship five times and have made seven international appearances.

Show Choir started expanding in 2015 and has grown to include choirs from Dorking, West Byfleet and Cobham under the baton of Steph Parker who took to the Choiroke stage on Saturday night.

Also taking part in the musical extravaganza were The Treblemakers, a village choir from Withyham in East Sussex formed under the directorship of Ralph ‘Ginger’ Millington.

In addition to the main event, there was a matinee Choiroke featuring three Surrey schools, namely Dormansland Primary School, St Aidan’s Primary School and Woodmansterne Primary School. The choirs sang together in an opening number, “The Muppet Song” and for the finale showstopper, “Consider Yourself.”

Choiroke’s charity partner this year is The Lady Taverners who raise money to provide equipment and modified mini buses for children with special needs. This year the aim is to raise £1,000 to purchase a sports wheelchair.

Please credit all photography to: www.chrismannphoto.com

BRAVO is a Social Enterprise formed as a Community Interest Company (CIC).

BRAVO’s objective is to connect business with the community across Surrey and Sussex; it is achieving this by producing business and community events and injecting the profits back into the community by supporting cultural community projects.

BRAVO has organised and hosted many highly successful networking events across Surrey and Sussex using interesting, prestigious venues including Herons Bonsai and Vines’ BMW showrooms. Their networking events are unique as they are organised to give delegates the maximum return for the time they have invested in attending. Each event is structured and gives attendees a variety of networking sessions – Spotlight, Open and Exclusive 1-2-1 –. Delegates are given a detailed delegate lists, refreshments are supplied and there is often a guest speaker. Events usually take place in the evening but some are during the day. They have been well supported and have received phenomenal feedback from both delegates and sponsors alike.

Team BRAVO is a group of business people freely offering the skills and experience they’ve gained in their respective fields to work together to meet BRAVO’s objectives and fulfil its mission and vision.