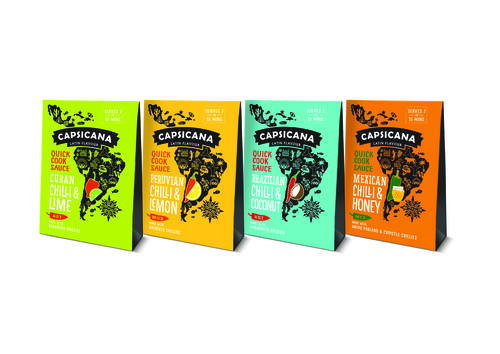 We work really hard at Capsicana to bring you the best tasting sauces possible made with great ingredients.

NEED SOME MIDWEEK MEAL INSPIRATION? THEN JOIN IN OUR #CAPSICARNIVAL AND CELEBRATE THE TASTE OF REAL LATIN AMERICA WITH CAPSICANA – A NEW RANGE OF AUTHENTIC LATIN AMERICAN COOK SAUCES LAUNCHING IN SAINSBURY’S THIS SUMMER!

Capsicana is a great tasting, authentic Latin American cook sauce range, inspired by real Latin American dishes such as Mojo sauce from Cuba, Aji Verde sauce from Peru, and Moqueca from Brazil.
Bursting with real authentic ingredients from the region including Habanero, aji amarillo and ancho poblano chillies, we promise to take you on a new taste adventure!

Founded by Ben Jackson, Capsicana was born out of a love of travel and cooking. Ben has eaten in many true Mexican cantinas and the inspiration behind Capsicana began in the late 90's when he was travelling with his Dad in Texas. They would drive around and visit friends in cities such as Austin and San Antonio. Both have large Mexican communities and it was here that Ben first laid eyes on proper Mexican food, which soon became his default cuisine of choice - whether going out for dinner or just grabbing something by the side of the road.

Ben, or Chilli Ben as he is known, comments "I founded Capsicana because I absolutely love chillies and Latin American food. Everything about it grabs me - most particularly all the delicious varieties of chillies. Chillies are about so much more than just heat. "We work really hard at Capsicana to bring you the best tasting sauces possible made with great ingredients."

Invite round your compadres, grab your pan, and in just minutes you can whip up our sizzling fajitas with a twist.

Using our smokin' Brazilian Chilli and Coconut Sauce, you are sure to take your plate on a taste adventure!