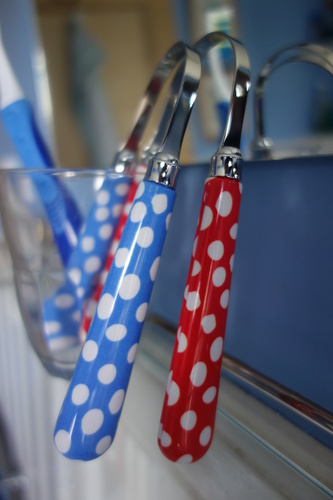 Question: What makes the perfect gift?

Collective wisdom seems to suggest the so called ‘perfect gift’ should focus on a long-term benefit or pleasure.

That said if you can achieve both - that will certainly be a bonus.

If the same gift can also be ‘personalised’, that will add to the theatre of giving, particularly at Birthday’s, Christmas or Thanksgiving.

How do you know you have given the ‘perfect gift’?

Easy, you’ll get a; “Thank you for being so thoughtful” in return.

So following thorough and objective analysis we can say hand on heart, that the AMANO™ range of designer tongue scrapers is the refreshing solution that ticks all the boxes - for family and friends.

Here’s how you can personalise an AMANO™ Tongue Scraper – for the loves in your life (the Best Selling tongue groomer in Selfridges and Harrods folks!):

For your wine loving Dad and Mum

Casually mention that we have featured in Decanter magazine as a taste bud reviver and wine experience enhancer. Explain that a clean palate will make a £10 bottle of wine seem more like a £25 wine and then suggest testing this theory over several glasses …
AMANO media

For your health fad Sister

She’ll be intrigued when you tell her The British Dental Journal called our top of the range AMANO the ‘Roman Emperor’ of tongue scrapers – high praise indeed. Then point her in the direction of the extensive ‘benefits’ section on our website – she’ll be even more impressed.
AMANO benefits

For your Brother who still fancies himself as a Messi

Tell him this gift could really boost his weekly five a-side football game! Astound him with the fact that AMANOs are used by Premier League Teams – to enhance their performance. And they included winning teams in the 2016/17 Season. Calmly explain that this is not fake news!
AMANO Footballers

For the Best Friends who are into all things hip

Watch their jaws drop when you tell them GQ magazine placed their gift in a “10 COOLEST things in the World” listing in June, whilst TATLER waxed lyrical about us ‘leading the field’. Surely that makes us a must-have fashion icon? AMANO will definitely brighten up their minimalist bathroom.
AMANO media

For Gran or Grandpa who lament; “Food just doesn’t taste the same these days”

Carefully explain that as we age our taste buds diminish in number and efficiency. So it is far harder to register the chemicals released from chewing food. Tongue scraping has been medically shown to give taste buds a fighting chance – so reviving appetite. Well done, this could be their favourite gift of the year!

And finally, for your esteemed Colleague with bad breath!

We all have a respected Colleague whose oral care regime is shall we say a little remiss. You don't want to know precisely what they ate, smoked or drunk the night before - when they sidle up to you by the water cooler to discuss Trump/Brexit or even work - and a toxic smog quickly envelopes you.

So why not have an Office whip round?

And leave them an AMANO on their desk - and just write; "From your concerned Colleagues".

If it's done in the right spirit they may try it, appreciate it and everyone benefits!

Mano Manoharan CEO of AMANO added;
" Tongue scraping purists, like myself, would love to talk about the immense medical and dental benefits of tongue scraping. They would talk about the importance of removing the food and bacterial debris trapped on the papillary surface, that if ignored will lead to plaque, dental decay and even bad breath. And the association between poor oral care and heart health. You don’t need to mention any of this – except perhaps to your health fanatic Sister!"

"We believe AMANO represents the perfect quirky and useful gift for all ..."

Well done! You’ve hooked your gift recipient with a personalised back-story as to why the AMANO Tongue Scraper is the perfect gift for them this year …

AMANO is the best selling tongue scraper in Selfridges, Harrods and Planet Organic and is also available online: www.amanotonguecleanser.com