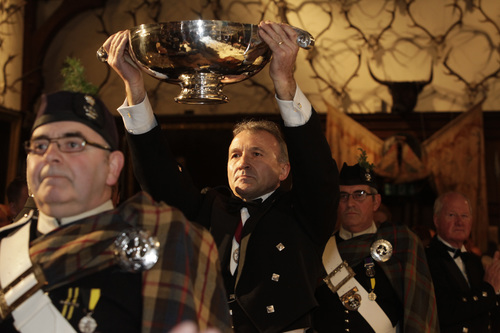 The global success of Scotch Whisky has been celebrated with 45 new members of the Keepers of the Quaich being inducted into the international society at a private ceremony held at Blair Castle in Blair Atholl on Monday 9th October 2017.

Guests at the prestigious event were addressed by the well-known Scottish crime writer Ian Rankin whose popular fictional detective Rebus first appeared in print 30 years ago.

Keepers of the Quaich was established by the Scotch Whisky industry to recognise the outstanding commitment of those who produce or promote the world’s finest spirit. To qualify, new Keepers must have worked in the industry for a minimum of five years.

To date, just over 2,600 men and women from more than 100 countries have received the honour.
A select few are subsequently distinguished as Master of the Quaich. The society will award only five Masters of the Quaich at each ceremony of induction. Masters are those who, since being inducted as a Keeper over ten years ago, have made an exceptional contribution to Scotch Whisky. Collectively, the society represents many thousands of years of experience and knowledge.

“Scotch Whisky was, and remains, the first global spirit and Keepers of the Quaich exists to recognise and celebrate the exceptional contribution of people working in all aspects of the industry, all over the world.” said Peter Prentice, Chairman of the Society. “At the ceremony we inducted new Keepers from no less than 19 different countries which demonstrates the continued popularity of Scotch Whisky.”

Keepers of the Quaich supports international chapters of the society in key export markets including Germany, Brazil and South Africa. “We were delighted that members of the newly-inaugurated Nordics chapter were able to attend the ceremony for the first time,” Mr Prentice added.

This press release was distributed by ResponseSource Press Release Wire on behalf of Connect Communications in the following categories: Food & Drink, for more information visit https://pressreleasewire.responsesource.com/about.