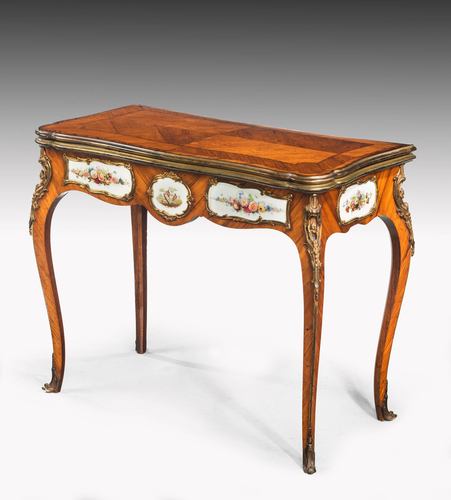 Windsor House Antiques really does have something for every home, with one of the broadest collection of antiques available from Sèvres porcelain chargers to four-poster beds, pieces from the 16th century to the Art Deco period. If redesigning a house perhaps a George III Neoclassical fireplace or a pair of monumental 19th century arched doors is just what is needed?

Perhaps a pair of stone urns or columns for your park or city courtyard would work. Not to mention a blackbuck head for a shooting lodge or chalet. For a dining area, eighteen 19th century dining chairs may be useful or perhaps six 17th century walnut chairs not to mention a set of four 19th century faux bamboo elbow chairs for the conservatory. Key signature pieces offered include a superb18th metamorphic Pembroke table, a three pillar 18th century dining table, a fine selection of refectory tables, a pair of Venetian blackamoors or a 16th century scagliola table?

For collectors of porcelain, pieces include Meissen figural groups, a 92 piece Spode Imperial service painted in the Japanese style from 1823, a pair of Cantonese ovoid vases, an 18th century Famille Rose bowl to name but a few. Or add ambience to your home by choosing from the one of the largest collections of period or unusual table lamps available or a period chandelier?

An exquisite Chippendale secretaire bookcase from 1770 less than a metre wide is ideal for a small apartment. Whereas an 18th century triple breakfront bookcase with crisp anthemion and scroll carving at just under 4 metres in width may be ideal for a country house or spacious loft apartment. With an Art Deco birchwood wardrobe for the dressing room of the man about town.

Christmas is on the way, so how about unusual presents for those who are difficult to buy for. A 19th century pillar box as seen at ‘Downton Abbey’, an ancient spice box for a keen cook. Or choose from a model of the frigate Pomone from 1820, a bronze of a triceratops or a leaping salmon or the wide selection of 18th and 19th silk and tapestry cushions.

The Company is at the former Royal residence of the Duke and Duchess of Gloucester, Barnwell Manor, which has been the flagship gallery for eighteen years. D. Kevin Smith founder of Windsor House Antiques begun from a one-man operation in Leeds in Yorkshire in 1957. The Company now is globally recognised, with six galleries that have been based in Mayfair, Amsterdam, Los Angeles, Hong Kong and Kyoto, the latter where a museum was created.
D. Kevin Smith, founder of Windsor House Antiques comments: “I have always enjoyed introducing collectors to pieces that add the perfect finishing touch to their home.”

Windsor House Antiques celebrating 60 years of excellence was established by D. Kevin Smith in Leeds, Yorkshire in 1957. The Company also celebrates 18 years at Barnwell Manor, a former royal residence, which offers collectors an ideal opportunity to view stock in a period setting. Windsor House Antiques is able to offer thousands of decorative antiques from all periods, both restored and unrestored, to trade and private clients. The collection covers every discipline from glass and porcelain for the table, furniture for every style of home, bronzes, clocks and garden statuary. This unprecedented collection hails from all periods and covers all disciplines. (Berengar Antiques, was acquired in 1999 and is based at Barnwell Manor)

The Company has already launched House Bargains, this year, where some exceptional pieces are offered at almost half their original price for a limited time. House Bargains is an additional service to the recently launched website.

Windsor House Antiques has grown from a small one-man operation into a globally recognised company, which is now assisting the third generation of clients. Showrooms have been located in townhouses in Grafton Street and Dover Street in London’s Mayfair, as well as six galleries in Amsterdam, Melrose Avenue in Los Angeles, Hong Kong and Kyoto D.Kevin Smith was involved in not only sourcing collections for a museum in Kyoto, but was also involved in the design of the building.

Windsor House Antiques works closely with interior design companies, museums and architects, together with assisting private and corporate clients with their collections. Almost all restoration is carried out on-site with only small and highly specialised restoration given to craftsmen outside the company. Stock items range from £100 to nearly one million pounds with the emphasis on quality and condition. All of our items are chosen for their quality, authenticity, colour of wood, graining, style and line. The Windsor House Collection can be viewed on the comprehensive website – www.windsorhouseantiques.co.uk

The companies are members of LAPADA, where D.Kevin Smith has acted as Vice Chairman for 23 years, and also CINOA a confederation of leading antique dealers and adheres to both organisations strict codes of practice.