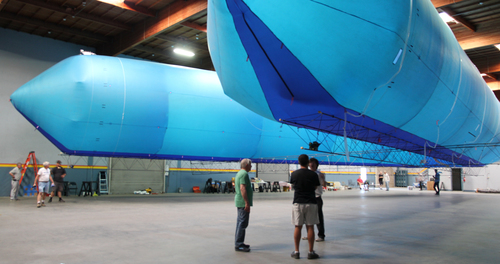 AVEALTO Ltd. is in the final stages of developing a commercial High Altitude Platform (“HAP”) to provide telecom infrastructure. Vehicle development is being conducted by JP Aerospace in California. Flight tests will be held in the Black Rock Desert in Northern Nevada.

The AVEALTO Ascender 28 vehicle has completed a comprehensive “Float Test” which is the last step prior to actual test flights. As part of the Float test, all the integrated systems of this vehicle were “flown” in the hanger.

“The Float Test was a huge success. As of today, we officially have an airship. The Ascender 28 will now be disassembled and moved to our flight line in Nevada, where we will make between 5-7 test flights over the coming months, testing all systems for function and increased flight duration. Later missions will also test the AVEALTO Telecom payload.” – John Powell, JP Aerospace Chief Designer

AVEALTO Ltd. is a United Kingdom company. The European Union Countries and the European Space agency have invested tens of millions of Euros on studies related to High Altitude Platforms for telecom use. The results of these studies have been extremely positive. AVEALTO is the first company to step up and invest its own funds into the development of a commercially viable High Altitude Platform vehicle.

“This test moves us another step closer to our goal. We look forward to a very successful flight test regime of both platform and payload, leading to our first commercial rollout of the 60-meter platform in 2018.”
- Thomas A. Olson, Director of Business Development - AVEALTO

Avealto has assembled an experienced team that incorporates a blend of both telecoms and aerospace expertise. This team is led by Avealto founder, Walt Anderson. Mr. Anderson is a serial telecommunication entrepreneur, an early investor and supporter of commercial space activities, and co-founder of the International Space University in Strasbourg, France. Telecoms companies founded and run by Mr. Anderson in the USA and Europe realised substantial exit valuations for early investors.

About JP Aerospace: JP Aero has been designing, constructing and deploying high-altitude balloon systems for 39 years, for both commercial and government customers, including the US Air Force, where the first initial design of the high-altitude airship was built and ground tested. JP is also known for it’s assist to STEM education initiatives, with its ongoing “Pongsat” program.