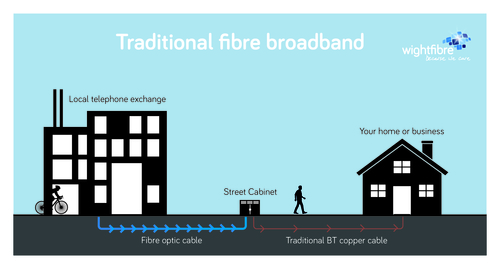 WightFibre announces ground breaking investment to roll out full-fibre, future proof, ultrafast broadband across the Isle of Wight
• £35m investment from Infracapital, including funds from the government’s Digital Infrastructure Investment Fund
• Gigabit (1,000Mb) speeds available to homes and businesses across the island by 2021
• Investment will create The ‘Gigabit Island’ giving the island some of the fastest broadband speeds in the world.

WightFibre is the first company in the country to receive investment from the government’s new Digital Infrastructure Investment Fund, which was launched by HM Treasury in July this year.

WightFibre’s full-fibre broadband network will provide speeds of up to 1Gb (1,000Mb) or faster to over 50,000 homes and businesses across the island, including areas of the island not previously served by WightFibre. This will create the UK’s first ‘Gigabit Island’.

WightFibre’s chief executive officer, John Irvine, said: “Just 10 years ago few of us could have imagined just how much we would all be using the internet both at home and work. Traditional copper networks have struggled to keep up with demand. The new WightFibre full-fibre network will be capable of handling the islands broadband demands for decades to come, catapulting the island into the front line of the new digital economy”.

James Harraway, Director of Infracapital, commented: “We are extremely pleased to announce our investment in WightFibre. This is the first investment by Digital Infrastructure Investment Partners, jointly with Infracapital’s Greenfield strategy, WightFibre has a strong local brand and has a proven capability to deliver good service and fast broadband to homes and businesses on the Isle of Wight, and we look forward to supporting the expansion of its network, to the benefit of customers island-wide”.

The Exchequer Secretary to the Treasury, Andrew Jones MP said: “I am delighted that just four months since launching the Digital Infrastructure Investment Fund, we are already seeing investment in full fibre broadband flourish. Today’s investment will help provide people living and working on the Isle of Wight with first-class connectivity fit for the future.”

“Working with private investors, we will be awarding providers more than £1 billion to bring this gold standard of broadband to people and businesses in all corners of the UK.”

Bob Seely, MP for the Isle of Wight, welcomed the announcement, “This investment is great news for the Island and will mean the majority of homes will soon have some of the fastest broadband speeds in the world.

"The Isle of Wight's WightFibre is the first company in Britain to receive investment from the government’s new Digital Infrastructure Investment Fund.

"This is a huge vote of confidence both in WightFibre and in the ambitious plans for the Island to become a digital hub."

“Good broadband infrastructure is an important factor in attracting new investment and new jobs to the island, and sits alongside the aspirations we have for our emerging Island digital strategy. This investment in WightFibre will make the island an even more attractive place to live and work for companies considering setting up here”.

The investment will safeguard 34 jobs and create around new 20 permanent jobs at WightFibre and 120 temporary jobs during the build phase of the new network.

The new network will be built over the next five years. WightFibre will provide details of availability of the service in the coming months. In the meantime, islanders interested in receiving the service can register their interest at www.wightfibre.com/gigabitisland.

A short document providing some detail and outlining the benefits of the Gigabit Island has been made available by WightFibre and is available to download here:

Note to Editors:
A description of the benefits of full-fibre broadband versus copper based broadband together with supporting graphics can be found here. www.wightfibre.com/full-fibre

About WightFibre.
Since 2001, WightFibre has owned and operated its’ own telecommunications infrastructure entirely independently of BT. WightFibre provides phone, tv and broadband services to homes and businesses on the Isle of Wight. www.wightfibre.com

Infracapital, launched its Digital Infrastructure Investment Partners platform in July, to invest in full fibre broadband infrastructure in the UK, alongside its’ Greenfield strategy, in partnership with Cameron Barney. Drawing on decades of experience in the telecoms sector in the UK and Europe, the platform will invest to improve internet connectivity throughout the country.