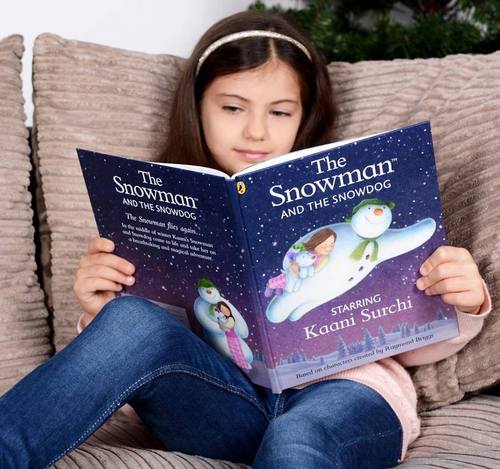 In 2014, Penwizard partnered with Penguin Random House Children’s Books, to announce their new personalised version of The Snowman™ and The Snowdog for children and parents to enjoy at Christmas.

Adding to Penwizard’s personalised book portfolio this personalised edition of The Snowman™ and The Snowdog includes a child's name and customised avatar that feature throughout the story and within the classic and beautiful illustrations. Penwizard worked closely with both PRH Children’s Books and Lupus to produce this stunning personalised book, and created the child avatar that seamlessly fits the iconic style of this classic story, which was originally created by Raymond Briggs in 1982.

Capture the essence of Christmas and this award-winning animation and enter the magical world of dancing snowmen, a competitive penguin and Father Christmas in this delightful personalised book.
The book can be personalised by selecting hairstyle and colour, skin tone, pyjama colour and glasses to create a likeness to any child. The child’s name is included along with an optional personal message that is printed on the inside front page. Books are printed and mailed within 3-5 working days.

Penwizard was established in 2004 and is considered the market leader in creating print on demand stories in which children can star in their own adventure. Penwizard currently provides POD publishing for some of the biggest characters in children’s licensing Peppa Pig and Ben and Holly’s Little Kingdom.

The Snowman™ and The Snowdog is available from www.penwizard.com and is priced from 17.99 GBP plus p&p.

About The Snowman™ and The Snowdog

Originally published in 1978, The Snowman, created and illustrated by Raymond Briggs has become one of the world’s most popular children’s books.  Available in 15 languages it has sold in excess of 8.5 million copies worldwide with over 3 million of these sales in the UK published under Puffin editions.  Adapted for screen by producer John Coates, the Oscar-nominated animation launched on Channel 4 in its inaugural year in 1982 and has been repeated every Christmas since.  The sequel, The Snowman and The Snowdog premiered on Channel 4 on Christmas Eve 2012 and was seen by over 10 million people over the festive period.   The Snowman brand enjoys an international audience with global broadcast of the sequel, along with an array of consumer products now available.  Snowman Enterprises Limited (SEL) is a Penguin owned company