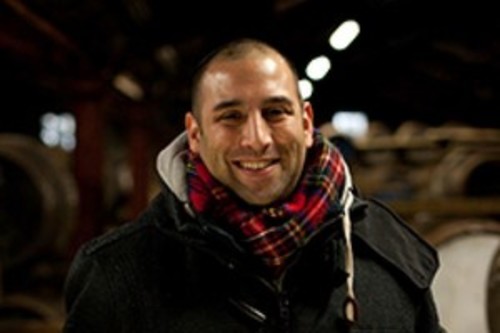 Saved from dereliction in 2007 and reopened in 2014, Annandale Distillery has done much to establish itself as a leading visitor attraction in its own right. But as bottling of its first production approaches, Annandale has signalled its intent to step up a gear with the hire of General Manager David Ashton-Hyde, and Brand Manager Vicki Hamilton.

With many years management experience gained at Heston Blumenthal’s Fat Duck Group in Bray, Ashton-Hyde is hugely excited by the potential that Annandale Distillery has to offer.

“The future of Annandale is extremely exciting,” he says, “and having the opportunity to join its journey at this stage is an opportunity I am relishing. After my first visit I was in awe of the operation, and totally immersed in optimism and the possibilities this distillery has to be a top contender in the busy world of whisky.

With my experience of developing business concepts over the years, most recently at The Hinds Head, The Crown and Perfectionist Café, and also having the pleasure of working alongside Hestons’ Waitrose beverage development team, I’m excited to further finetune the current hospitality, retail and visitor experiences Annandale has to offer.”

The Distillery is gearing up to bottle its first production Single Malt Scotch Whisky, with a limited number of bottles available from May. Located in Annan, a short distance from Dumfries, Annandale Distillery challenges the misconception that Lowlands distilleries only produce light and fruity expressions.

”Annandale is built in the middle of a peat bog”, says owner (and self-confessed peat-heid) David Thomson, “so peat was used to dry the barley in the days when it was malted on site. Most of the distilleries in the South of Scotland would have produced peated whisky in the early days”.

With a wait list exceeding 1000 whisky enthusiasts, anticipation for both expressions is palpable. Annandale also produces Rascally Liquor®, a feisty clear malt spirit that’s attracted glowing 5 Star PLUS reviews from Difford’s Guide, and which Hamilton is keen to introduce to the cocktail sector.

The hires follow a planning application to expand the Annandale site with a new bonded warehouse, store and bottling plant that will ensure the Distillery can meet demand well into the future.

MORE ABOUT ANNANDALE DISTILLERY
Established in 1836, Annandale is one of Scotland’s oldest operating distilleries.

Located close to the Scotland/England border, it’s also the first (and last) distillery in Scotland.

Whilst in the ownership of the famous Johnnie Walker, Annandale Distillery closed in 1918, seemingly forever, but was saved from dereliction by Professor David Thomson and Teresa Church. Operations resumed on November 3rd 2014 and three years later on November 15th 2017, the first bottle of Annandale Single Malt Scotch Whisky was filled. Look out for Man O’Sword and Man O’Words from Spring 2018.