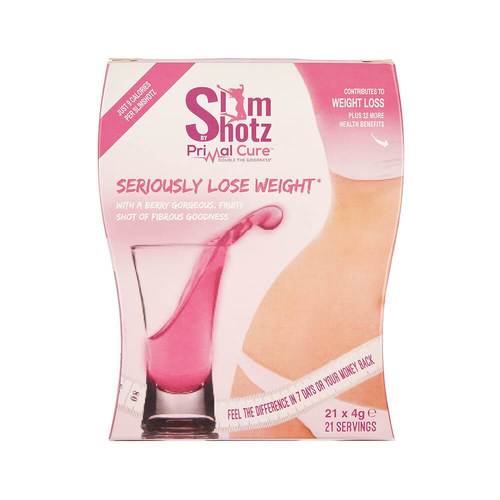 With the recently launched book in the shops and the UK’s first dedicated SKY health channel (670) now live, Primal Cure has announced a full range health supplements available to purchase on Amazon, via the TV channel and from www.primalcure.com.

Spearheading the range is a unique new product called SlimShotz. Formulated and produced in the UK, the product aims to help people lose weight the healthy way, with a tasty, fruity shot of natural goodness. Working as an appetite suppressant for those needing a little bit of help cutting back, its ingredients are proven to help improve health, at the same time as helping to shift the pounds.

With verified results, the product contains Glucomannan (we call it Gluco-K) a natural soluble fibre extracted from the Konjac plant. It is found in the walls of the plant’s cells and has the ability to expand like a sponge, absorbing more than 50 times its weight in water, making us feel fuller for longer and therefore means we eat less. Gluco-K has been clinically proven to aid weight loss. In fact, it’s the only ingredient to be officially recognised by the EU Commission to contribute to helping us lose weight.

Sandie Wells commented, “Whilst there are many, many slimming products on the market, the majority of them contain artificial sweeteners and other man-made ingredients. I loved the fact it was 100% natural and tasted utterly delicious. I lost 6 lbs in one week on SlimShotz! It also stopped me from snacking in between meals... I thought it would be difficult to cut out all the carbs, but on the contrary it’s made me review my diet and become far more aware of healthy eating”.


Using the plant-based sweetener Stevia and cherry powder, the drink has a sweet taste but doesn’t disrupt or spike insulin levels. Each drink also contains less than 9 calories a time!

Formulated with Zinc
SlimShotz has been formulated with zinc, which contributes to normal macronutrient metabolism and maintenance of normal hair, skin and nails. It also supports our cognitive function and metabolism of fatty acids.

Lowers Cholesterol Levels
Trials of Gluco-K have also clinically proven that more than 4g of the ingredient (and by the way, the recommended 3 servings of SlimShotz provides way more than that) contribute to the maintenance of normal blood cholesterol levels. According to WebMD “it may also slow the absorption of sugar and cholesterol from the gut, helping to control sugar levels in diabetes, and reducing overall cholesterol levels.”

Contains Inulin
Inulin has been part of the human diet for centuries and can be found in many fruits and vegetables, including bananas, leeks, artichokes, asparagus and onions. And just like Gluco-K, is a water-soluble fibre that expands in water. The inulin used in SlimShotz is extracted from the roots of the chicory plant and has significant, and scientifically proven health benefits. As yet, these haven’t been approved by the European Food Standards Agency (EFSA) so we can’t disclose these, but, what we do know is that it’s a great pre-biotic and a perfect food to feed our friendly bacteria. Whilst there are no EFSA claims established for Inulin, there is evidently good reason why there are over 150 Inulin supplements already on the market in the UK.

Early product reviewers have been amazed by the results of using SlimShotz alongside a healthy diet.

“They are brilliant. I usually have one around 9.30am instead of breakfast, then another around 3pm after work. They really fill you up and I’ve not felt hungry at all. That's why I’ve ordered another two boxes!” Vanda Phelan

Primal Cure is so certain of the positive benefits of SlimShotz that a 7-day money-back guarantee comes with the product – its ‘Primal Promise’.

For more information visit https://primalcure.com/products/slimshotz
The Primal Cure movement is also a social enterprise, whereby it provides malnourished children around the world with a vitamin or mineral they’re deficient in for EVERY supplement product we sell! The Primal Cure book is not-for-profit, with all proceeds going to the Colourful Life Foundation, providing nutritional support to under-nourished children in disadvantaged areas.”

Primal Cure TV can be found on Sky Channel 670

About Primal Cure:
The Primal Cure Movement is definitely not a diet. Our mission is to advise people how to live life ‘the Primal way’ - providing a long-term approach to sustainable health.
The book Primal Cure has been written by digesting copious amounts of rigorous scientific research. In getting his own health back on track, the Author has read and digested hundreds of books on diet, health, exercise, the history of humankind, nutrition and almost anything that could help him get a better understanding of how to live healthy for as long as possible.

The book discusses how a combination of carbohydrate overload, eating too frequently and a sedentary lifestyle, are pretty much responsible for all illnesses in the modern world. Primal Cure is about focusing on what we were designed to eat. It is the natural diet of our species! It also pays close attention to when we eat and looks at the various types of exercise that will aid your health rather than those that are known to do long term damage.

About the Steve Bennett
Steve Bennett is a father of seven children and one of the UK’s most prominent business leaders. He has created many businesses and his companies employ over one thousand people around the world. His holding company BHHG (Bennett Health and Happiness Group), works exclusively in areas where they can improve the lives of others.
One of Steve’s most well known businesses is television company – Gems TV. With his involvement in sourcing gemstones from around the world, Steve has spent many years in remote countries and much of the insight in this book has been garnered during his travels.
His family founded the charity The Colourful Life Foundation and has built schools in countries including India, Tanzania and South Africa.
About Primal Cure TV

The new channel, PRIMAL CURE TV is the ONLY dedicated 24-hour health channel on Sky TV. The channel and the products promoted as part of the programming are born out of Bennett’s recently published lifestyle book - Primal Cure.