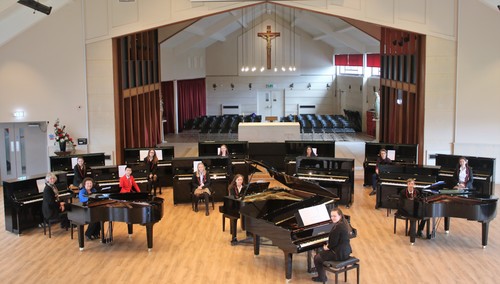 Yamaha Music London is the flagship store for Yamaha Music and a direct music education resource, enabling educators, schools, conservatories and colleges to access the most comprehensive range of quality, musical instruments and equipment in the world.

Yamaha Music London has recently worked on an exciting musical collaboration with St Joseph’s College in Reading. Proud of its musical heritage and reputation, St Joseph’s shares the Yamaha ambition of cultural enrichment through musical excellence in the arts.

St Joseph’s has opened a brand new purpose built music centre, the culmination of a lot of hard work and the long-held dream of Head of Music, Mandy Kesel.
Mandy has been working at St Joseph’s for over thirty years and has seen the cramped music facilities stretched almost to breaking point but thanks to the support of the Head and the Governors, investment was found to open a brand new music centre earlier this year to accommodate pupils aged 5-18 years.

Vivienne Bartolucci, Education Executive and Music Educator based at Yamaha Music London, met Mandy on site to assess the musical requirements of the new music facility and to ensure that the pupils and teachers would fully benefit from their new musical resources.

St Joseph’s Head of Music, Mandy Kesel, explains: “I was already a Yamaha fan as I have a Yamaha Grand which I love. In my opinion, Yamaha’s pianos are the finest because of their rich sound and feel. Somehow even the smallest hands can travel the keyboard of any Yamaha piano with comfort. The Yamaha pianos are the best for practice and for perfecting performance skills.

We made a final selection of thirteen Yamaha acoustic pianos in total which includes three Grand Pianos and tenYamaha upright pianos. We felt we were in the right musical company as Yamaha Grand pianos are used in prestigious venues and recording studios around the world, including Abbey Road Studios.

The models were chosen for their quality and versatility to suit beginners, intermediate and advanced students.
The new music centre has eight practice rooms, seven with Yamaha pianos, one with a Yamaha Clavinova piano and a recording studio plusthree class rooms including a music technology room.
Yamaha is also a leading innovator in music technology and we have fitted twelve computer work stations with Yamaha electric keyboards and a Yamaha drum kit. Teachers can listen to each pupil play individually without distractions.We have also installed large TV screens to show YouTube music clips to inspire pupils.
Our plans were ambitious for the music centre and Vivienne has supported us throughout the entire process”.

St Joseph’s College welcomed the leading British composer,Cecila McDowell, to perform the official opening ceremony in March. As a grand finale to the celebrationsYamaha Music London has invited Andrew Zolinksy, one of the most distinctive musical voices of his generation and Professor of Piano at the Royal College of Music in London,to perform a recital and a master class for pupils at St Joseph’s College’Founders’ Day on 05 November.

Andrew Zolinksy is very supportive of the musical collaboration:
“At a time when music education has all but disappeared from view at most schools, I am so happy to find that at St.Joseph’s College, music is seen as a priority. By forging a link with Yamaha Music London they are able to provide pianos of the highest quality to help the students bring their music to life.

“I am very excited to be coming to St.Joseph’s, both to play a recital and to work with some of the students. I am passionate about ALL music, but, as a concert pianist and teacher specialising in classical music, I want to share my passion with the students, and, I hope, to inspire them.

I hope that my visit will be the start of a continuing relationship, and once again, my huge admiration to all at St.Joseph’s that have helped this important part of young people’s education to have a meaningful presence at the school.”
-ends-
Wordcount: 677
For further press information please contact: press@yamahamusiclondon.com
or phone 07732 867899

Editors Notes
Product List
They are all acoustic pianos.

Besides the acoustic pianos for the launch of the new music block they also purchased:


Pianist Andrew Zolinsky’s unique style of programming and his individual interpretations have secured performances at many prestigious venues and festivals. His work with living composers brings a vivid freshness, energy and passion to his interpretations of music from previous eras.

Andrew has given World and regional premieres of many of David Lang’s works, including, the world premiere in New York of the complete set of Memory pieces, and the Piano Concerto, Fur, commissioned by the BBC, at the Vale of Glamorgan Festival with the BBC National Orchestra of Wales conducted by Grant Llewellyn.

Andrew is also very closely associated with the music of Unsuk Chin. He has performed her complete Etudes for solo piano on many occasions, including the French (Festival Musica in Strasbourg), London (Wigmore hall) and Italian (Venice Biennale) premieres. Andrew also gave the London première of her Piano Concerto with the BBC Symphony Orchestra conducted by Miguel Harth-Bedoya. As part of the BBC’s ‘Total immersion’ series in 2011, Andrew gave the UK premiere of the Double Concerto with percussionist Owen Gunnell and the London Sinfonietta conducted by Stefan Asbury at the Barbican Centre.

Andrew also works with many of today’s leading British and Irish composers, including James Clarke, Laurence Crane, DonnachaDennehey, Michael Finnissy, Michael Zev Gordon, and has given many performances of works by the Ukrainian composer ValentinSilvestrovand the Uzbekistan-born Alexander Knaifel.

Andrew has recorded for Cantaloupe, Guild and NMC. Paul Driver in the Sunday Times chose Andrew’s recording of solo piano music by Michael Zev Gordon (NMC), as one of the TOP TEN CONTEMPORARY CD’S OF 2009. His disc of David Lang’s piano music on the Cantaloupe label was released in November 2011.

In addition to the aforementioned venues and festivals, Andrew has performed at the Royal Festival Hall, Merkin Hall, Brooklyn Academy of Music and Le Poisson Rouge in New York, the Venice Biennale, and in the Czech republic, Ireland, Japan, Lithuania, Portugal and Taiwan. In November 2013, Andrew made his debut in the International Piano series at London’s Southbank Centre; this recital also formed part of the Southbank centre’s fascinating series, The Rest is Noise. Earlier that month, he made his debut at the Palau de la musica in Valencia with a programme of music by Beethoven, Liszt and Schumann.

In 2014, Andrew played in the prestigious Piano Rarities Festival in Husum, Germany, and later that year returned to the Royal Festival Hall, London to give the UK premiere of ‘Gesualdo dub/raummitgelöschterfigur’ by the young Serbian composer Marko Nikodijevic, with the Philharmonia orchestra conducted by Baldur Brönnimann. This concert was part of the Philharmonia’s Music of Today series.

A busy schedule in 2018 sees Andrew performing twice with the Royal Philharmonic orchestra, and giving recitals in London, Dublin, Spain, China and Lithuania.

As passionate about teaching as he is about performing, Andrew is professor of piano, at the Royal College of Music, London - He is also in charge there of a Masters level specialism in contemporary piano music. He also teaches at Goldsmiths University.