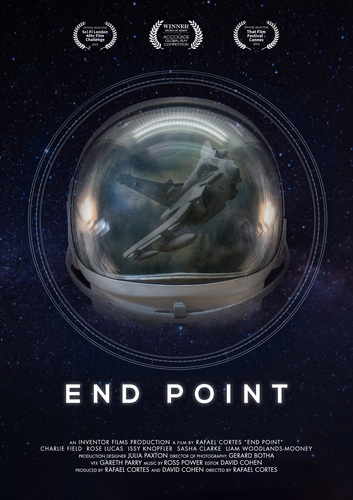 Inventor Films has received a prestigious Award of Merit from The Accolade Global Film Competition. The award was given for the short film, ‘End Point’, directed by Rafael Cortes. The film was a finalist for this years London Sci-Fi 48 hour Film awards and That Life Film Festival in Cannes. The film was later graded and finished with VFX by Warner Bros De Lane Lea and has recently been selected by several other festivals.

The story is about a man who travels back in time to prevent the assassination of his wife. On location at White Waltham Airfield, the film was shot imaginatively using several aircraft including a Panavia Tornado combat aircraft and a world War Two Hawker Hurricane. An Airbus A320 cockpit was also made to resemble a time-travel machine.

Cortes praised the skills of his team:
“I feel very grateful to receive this award and all credit goes to our exceptional cast and crew. Directing a short with a rapid turnaround is a challenge but we pulled it off. Most people are shocked when they hear that this film was shot in 12 hours”.

The Accolade recognizes film, television, videography and professionals who contribute to profound social change. Entries are judged by professionals in the film and television industry. Information about the Accolade and a list of recent winners can be found at www.accoladecompetition.org.

In winning an Accolade, Inventor Films joins the ranks of other high-profile winners of this internationally respected award including Malcolm Clarke, Dave Bossert and Hollywood industry veteran Ron Howard.

Rick Prickett, who chairs The Accolade Global Film Competition, had this to say about the latest winners, “The Accolade is not an easy award to win. Entries are received from around the world from powerhouse companies to remarkable new talent. The Accolade helps set the standard for craft and creativity. The judges were pleased with the exceptional high quality of entries. The goal of The Accolade is to help winners achieve the recognition they deserve.”

For more information contact the press office at www.deiamedia.com

This press release was distributed by ResponseSource Press Release Wire on behalf of Inventor Films in the following categories: Entertainment & Arts, for more information visit https://pressreleasewire.responsesource.com/about.