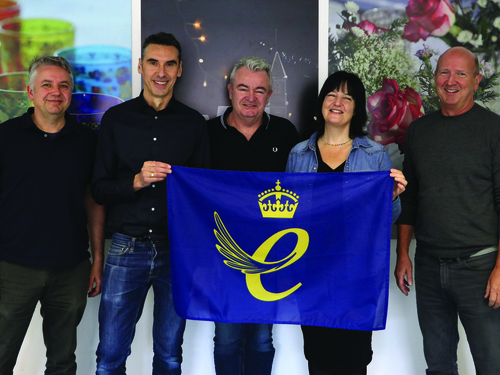 A west London design company that received royal recognition today for its spectacular export growth has warned of the impact of a hard/no deal Brexit.

Representative Deputy Lieutenant for the London Borough of Ealing, Richard Kornicki today presented the Queen’s Award for Enterprise in International Trade to Acton based business Rex London. Since 2012 the company’s exports - to more than 70 countries worldwide - have soared by more than 250%, accounting for around 55% of total sales last year. More than 60% of those international sales went to the EU – with France, Germany, Spain and Belgium being the key markets.

Rex London designs and sells gift and homeware products from its Acton Vale base, where it employs more than 70 people and produced a £12 million turnover in 2018.

“We are excited and proud to receive this recognition of our hard work. We take a global outlook – with a particular focus on Europe. Our websites are fully translated into French, German and Spanish, and we participate in several European trade shows each year.

“Clearly, we are worried that a hard or no-deal Brexit would affect the continued growth of our business, and our ability to expand further into European markets. That’s why we have recently established bases in Germany, the Netherlands and Belgium so we can sell direct to local retailers. This presence will also act as our foothold in the European Union should the UK leave without a deal - allowing us to avoid additional custom clearances while maintaining prompt delivery to our customers.”

Mr Biggs cautioned that any shift in order processing may have a long-term impact on staffing numbers in the UK operation.

Rupa Huq, Member of Parliament for the seat of Ealing Central and Acton, who was in attendance for the award presentation said “I’m delighted that Rex London has had royal recognition in the shape of a Queens Award. I’m really proud to be MP for the company, which employs 70 people in my constituency, with such an impressive turnover in such testing times - all from the heart of Acton. They started in 1981, a courageous move when the country was mired in recession and “Ghostown” by the Specials formed the soundtrack to the summer, but have gone from strength to strength ever since.

“In terms of standing up for small business I’ve been steadfast in resisting any form of Brexit and in particular fighting no deal - so with potentially challenging times ahead for our economy and society if we leave the European Union, long may Rex prosper.”

Since our beginnings on a market stall in 1981 on London’s Portobello Road, Rex London has been creating original gifts for her, him, and the kids, plus accessories and decorations for the home - all exclusively designed or lovingly chosen by our in-house creative team. As well as being a major online retailer in the UK and Europe, we are also an eminent international wholesaler, exporting to more than 70 countries. Our products can be purchased all over the world from small independent shops to galleries, museums, and large department stores.

Photographs to accompany your article will be available from the Press Office.