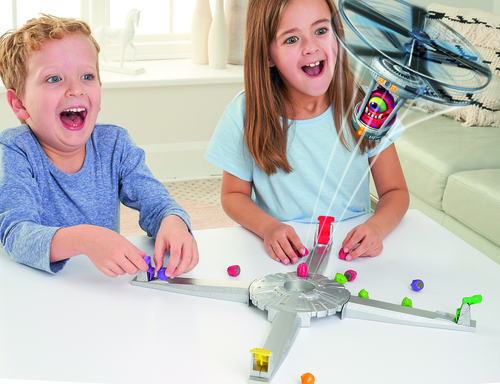 The race to the stars is on with two new launches from Interplay UK. With space programmes aiming to ramp up activity in the 2020s, kids play trends follow suit with new intergalactic themed toys and games!

The aliens aren’t invading, they are battling to leave! The first action game to feature a real flying drone, Drone Home is a fast race for kids to launch their four aliens to safety before the enemies knock them out! If your alien can successfully reach the spaceship, you can watch it fly off in the drone!

With a cool alien theme and flying payoff, the Drone Home game is excitement and head-to-head competitive play with sabotage possibilities that step up the competition level! SRP 19.99GRP, AW 2020.

Reaching into another universe, Interplay UK is launching an all new construction system, Snap Ships™, supported by TVCs, YouTube webisodes and a complementary app to support the play pattern and epic story behind it.

Snap Ships has a fantastic storyline to go with it, in which The Komplex—an alien species determined to annihilate all life—invades with no warning. To fight back, Earth has assembled an elite team of crafts to pilot a fleet of versatile and specialized attack craft called Snap Ships. Along the way, The Forge teams discover mysterious UJU tech, left behind by an ancient civilization, and can be added to their Snap Ships to give them unique and unheard-of abilities!

Dive into the Snap Ships universe with weekly animated webisodes on the Snap Ships YouTube channel, supported by behind the scenes content. Bringing the UJU technology, the Snap Ships universe can also be explored in the cool mobile app. A character will talk to you, walk you through building your ships and send you on special missions. Plus you can experience cool augmented reality play! Snap Ships will launch from Summer 2020 with process ranging from 9.99GRP to 39.99GRP.

Get images and more information on Interplay UK toy launches at Toy UK Fair on the media kit: