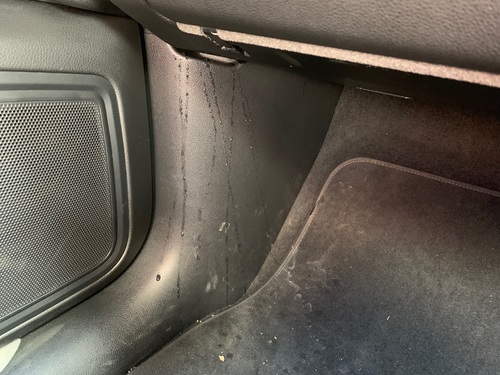 Have you ever heard of a leaking Porsche? Well, Paul Cox, 52 years old from West Hunsbury, Northampton purchased his dream Porsche and after just six months, everything he had ever dreamt of turned into an engineering nightmare.

Mr Cox purchased his Porsche Macan from The Porsche Centre Silverstone on March 25, 2017, for £51,500 but has since labelled it ‘the worst experience’ of his life. From the moment he drove off with the car – everything became a problem.

After just six months of owning the Porsche, the car broke down and had to be towed back to the dealership for inspection and repairs. The outcome was that the car broke down due to ‘a blocked PDF’. This was only a very small pothole in the road for Mr Cox, things were about to get a lot worse.

Mr Cox says: “I had never owned a Porsche before and had mainly owned and driven Jaguar and Land Rover vehicles, so the concept of driving a highly respected Porsche was exciting and I couldn’t wait to drive off with my new wheels.

“The first issue with the vehicle was just a very small one – but then came the big one, the leaking Porsche nightmare. In February 2018, we experienced several really heavy rainstorms, but nothing too usual for the weather here in the UK. I went to get into my car and discovered that there was water running down the A pillars and into the front footwells, the front headlining was soaked through, and consequently dripping water into the centre roof console. The water was getting into the electrics of the car, so I decided to take the car back to the ‘experts’ to repair and inspect for what the issue was.”

After an apparent modification, Mr Cox was told that the car had leaked due to ‘blocked drain holes. So, the car was returned, and another few months passed, and another heavy rainstorm took place in October and the car ended up swimming in water yet again.

Mr Cox says: “By this point – I wanted answers. I wanted to be listened to. I wanted support from The Porsche Centre Silverstone, but this wasn’t what I received at all. There were no results as to why the car was leaking, and my car was returned in an extremely sorry state. The carpets were returned dried but covered in residue stains when I had clearly stated that I did not want this car returned to me until the problem was solved and all of the interior was restored to its original state. So, I was sent on my way and told that ‘if the car leaks again, take some pictures and send them over to us”.

So, on the 14th December 2018 when the rain came, so did the leaking nightmare.

“The car leaked yet again in February and March of 2019 and has been with Porsche Silverstone Centre since July 2019. I’ve lost money on this car and am continuing to do so the more time that passes. In August 2019, The Porsche Centre Silverstone offered to buy the car back at trade price of £29,000 – quite frankly I was insulted. I’m completely trapped in this Porsche nightmare. I am unable to use the car as it is in a sorry state, and I have been offered little compensation and support from the centre. The car is quite clearly faulty, but nobody wants water on their hands do they.”

This press release was distributed by ResponseSource Press Release Wire on behalf of Provence PR Ltd in the following categories: Motoring, for more information visit https://pressreleasewire.responsesource.com/about.