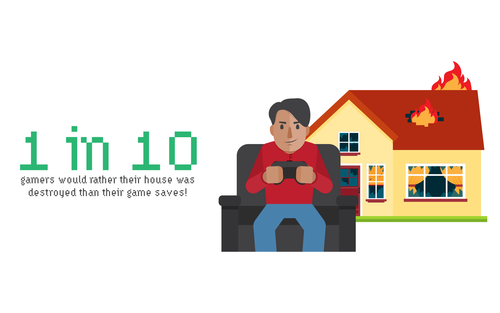 - Mobile game publisher Kwalee researched just how important games are to players, and the lengths they would go to, to protect their ‘saves’
- ‘Game save data’ refers to the saved progress specific to a players journey through a game, be it a season on FIFA or story on Assassin’s Creed
- 1 in 10 gamers admitted they would rather see multiple valuables destroyed over their game save, including phones, wedding rings and their homes!

Mobile gaming publisher Kwalee has revealed exactly how important our virtual lives have become in 2020, finding that 1 in 10 gamers admit they would rather see their whole house destroyed, before losing their ‘save game data’.

The ‘save game data’ refers to the data file that allows players to pick up where they left off on any game they’re playing. Meaning that a FIFA fan can pick up their career managing their favourite team after switching the console off, continue playing as a character they have spent countless hours to create or keep progressing through that mobile game they play on their lunch break.

This data is so important to players that it isn’t just the brick and mortar of a home that gamers would rather be destroyed to save their playthrough, as 1 in 10 also admitted that they would rather their car was crushed, or even that their wedding ring was destroyed (ouch).

With many now referring to losing their phone as feeling like they’ve lost a limb, you would think the one item gamers would want to keep a hold of would be their phone, but almost 1 in 5 (17%) would choose to lose their phone, before their game’s progress.

With game save data harking back to the days of physical ‘memory cards’, Kwalee spoke to various gamers that had suffered the loss of their game progress and can attest to the horrors of losing it.

One of these gamers is Dinara, 29, who explains: “Back in 2015, I had long been awaiting the release of Assassin's Creed: Syndicate and made sure I was amongst the first to get my hands on it and play. I was glued to the game, sinking hours into completing everything and was around 95% through the game, when my boyfriend tried to free up space on our external hard drive to install the new Call of Duty.

Long story short, he accidentally selected ‘delete all’ and wiped everything, including my game, from the hard drive. I was speechless. I didn’t even have the power to be angry and couldn’t speak to him for days. It’s been almost five years and I still can’t bring myself to pick up the game again, and haven’t completed an Assassin’s Creed game since!”

Kwalee’s study also revealed other areas that help to describe how important gaming is to us all, with further findings including that more gamers remember how to defeat an end of level boss in a video game, than remember what their actual boss set as their targets/KPIs at work (17% vs. 5%).

CEO of Kwalee, David Darling CBE commented: “I’ve been making and playing games for over 30 years, and have always been driven by how immersed players can become in what you’ve created.

We wanted to find out how far this love of gaming will go, and the fact people would trade their homes or wedding rings to retain their saves shows just how important gaming is to modern life. Of course, we wouldn’t advise anyone to actually place their home above their game data, or admit to their partner that they’d happily get rid of their wedding ring to save it! We are however happy that being a company that makes quick, fun mobile games, our players would have to worry a little less about this jeopardy… although that’s not to say some players aren’t as attached to their achievements on Jetpack Jump, Line Up or Rocket Sky!”

For Kwalee’s full findings and more stories from gamers that lost their saves, visit: https://www.kwalee.com/blog/hyper-casual-reading/save-game-d...

Further case study comment from players who have lost their ‘save game data’ available on request.

Kwalee are a leading publisher and developer of hyper-casual mobile games, with a collection of games that have gained over 400 million downloads, thanks to hit titles that include Draw It, Shootout 3D, Off the Rails 3D, Rocket Sky! and Go Fish! Founded by gaming industry icon David Darling, who is joined by a team of mobile gaming experts, Kwalee are currently on the lookout for great games from developers with an understanding of the fast-paced and rewarding world of hyper-casual gaming.