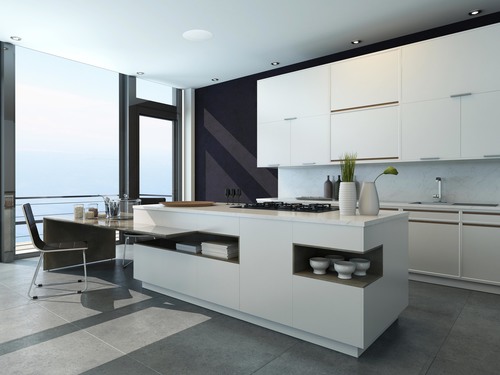 21/10/2020 - Lithe Audio is excited to announce the introduction of a World First to its highly-acclaimed ceiling speaker collection: Wi-Fi Ceiling Speakers with AirPlay 2 built-in. This addition of Apple’s latest protocol enables users to group Lithe Audio’s all-in-one ceiling speakers together with other AirPlay 2-enabled speakers and systems to create a fully immersive Multi-Brand, Multi-Room audio solution.

AirPlay 2 enables users to control all their audiovisual technology – soundbars, speakers, TVs - from one device, transforming their iPhone, iPad or Mac into an all-in-one entertainment hub. The addition of AirPlay 2 to Lithe Audio Wi-Fi speakers enables them to become part of this home entertainment experience, working seamlessly with other brands and across multiple devices to stream high quality audio throughout the home.

“This is a truly exciting development for us - and for consumers who now have the option of a cost-effective addition to their multi-room home entertainment systems and don’t need to be locked in to a single-brand solution,” says Amit Ravat, MD and co-founder of Lithe Audio:
“Our ceiling speakers deliver superb sound quality, with a pin-sharp clarity that will complement other brand offerings. And what makes them even more attractive is that they’re an all-in-one solution – with the 60W RMS amplifier and Wi-Fi built-in. This means that there’s no need for speaker cables or separate AV equipment, making them really easy to install or retro-fit into any home.”

Using AirPlay 2 alongside HomeKit and Siri, every compatible device in your household can be controlled using your voice.

It will also now be possible to ask Siri to turn on the lights, adjust the thermostat and play your favourite playlist through the Lithe Audio wireless ceiling speakers.

To ensure a complete and safe home solution, the Lithe Audio Wi-Fi speakers with AirPlay 2 also come in an IP44 version for safe use in bathrooms.
“We’re thrilled to be the first to market with an AirPlay 2 ceiling speaker,” adds Ravat: “It reinforces our brand as being in the forefront of innovation when it comes to high quality, easy-to-use home technology.

“For us, it’s all about creating a great user experience that combines advanced technology with ease of installation and superb sound quality. And these speakers will not disappoint.”

The frameless speakers are designed to ‘disappear’ into the ceiling, only protruding 3mm. The clever magnetic grille covers can be removed easily for cleaning or for replacement with a different coloured finish. The grilles can be painted to match your ceiling for a barely-there look.


About Lithe Audio
Lithe Audio (www.litheaudio.com) is a UK Company that designs, manufactures and sells a broad range of high quality, innovative electrical products such as ceiling speakers, wall speakers, wireless garden speakers and TV accessories such a wall mounts - all for commercial or residential applications. Lithe Audio was founded in 2014 by the team of professional electrical product designers behind the successful Retrotouch brand (www.retrotouch.co.uk ). All Lithe Audio products have been designed in-house by the same established Retrotouch team to ensure that they are state-of-the-art. The Lithe Audio range is ideal for consumers/DIY enthusiasts, builders, developers, interior designers, commercial property developers and hotels.

The company philosophy : The design team behind Lithe Audio share a passion for creating products that meet the needs of their customers. They put themselves into the shoes of the customer throughout the development process to produce a design that will exceed their expectations. For example, the wireless speakers that are completely different to anything else currently available in this sector were over 18 months in development until they met the designer’s highest standards. The same principle applies to all the products in the range. As the chief designer puts it: “We work forwards from what our customer needs are, and not backwards from what the technology allows. Everything we sell must be simple and intuitive to use for everyone from the developer to the whole family.”

Apple and the Apple logo are trademarks of Apple Inc., registered in the U.S. and other countries. App Store is a service mark of Apple Inc.