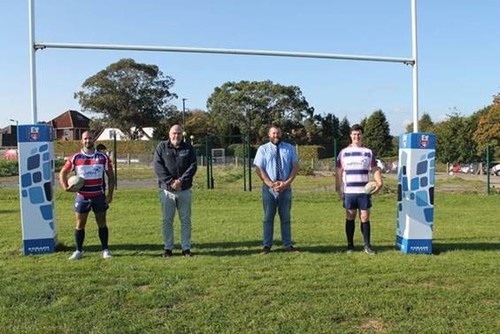 Wightibre’s role as the club’s new principle sponsor will ensure the Club has the means to fight for honours, and promotion in the London leagues. The sponsorship deal will mean that the company’s logo will take pride of place on shirts, post-protectors, fixture board, and signage around The Fairway ground.

Gregor Dean, Club Captain of Sandown & Shanklin RFC, and sponsorship lead for the Club said: “It’s hugely important for us to secure sponsorship because running a rugby club is an expensive business. The kit alone is renewed each year and this is very expensive. Having WightFibre as principle sponsor will help enormously. It is hugely rewarding to work in partnership with a company which also has a mind for community involvement and with its backing we are aiming to continue growing the Club, not only with the 1st XV but with the impressive 2nd XV and supporting Vectis RFC, the Island’s youth section.”

John Irvine, CEO of WightFibre adds “Sandown & Shanklin RFC is a great community rugby club. WightFibre is delighted to do our bit to support the club and the development of rugby on the Island for young and old.”

Since 2001, WightFibre has owned and operated its’ own telecommunications infrastructure entirely independently of BT. WightFibre provides phone, TV and broadband services to homes and businesses on the Isle of Wight.

The WightFibre Gigabit Island Project will see full-fibre broadband deployed to around 70,000 homes and business across the Island by 2022 and is already available to 22,000 households. The scale of this significant civil engineering project is reflected in figures that show how 500 Kilometres of trenches will be dug, containing 5 million meters of duct and 750 million meters of fibre-optic cable as this full-fibre, future proof broadband network continues to roll out across the Island, including areas not previously served by WightFibre. www.wightfibre.com

Those interested in receiving the new gigabit broadband services can apply on www.wightfibre.com