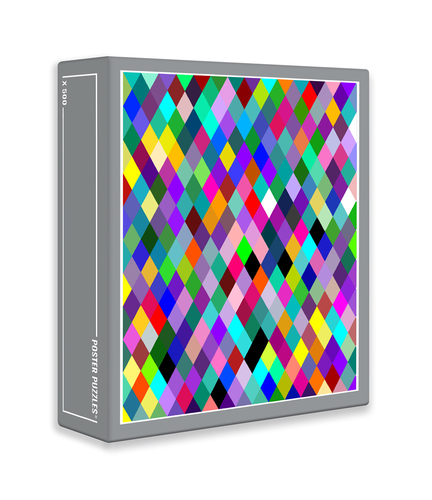 LONDON, UK – Puzzle nerds around the globe have teamed up to create the world’s first-ever crowdsourced jigsaw puzzle design, with stunning results.

The brainchild of planet-friendly jigsaw brand Cloudberries, this innovative project saw 439 puzzlers working collaboratively to create a brand-new puzzle, one piece at a time. In just over two hours, all of the sections of the puzzle were designed – and now Cloudberries has revealed the incredible results.

“We wanted to test a theory called the ‘wisdom of the crowd,” says Cloudberries co-founder Steve Vickers. “The idea is that when large groups of people are brought together, they’re much smarter and better at innovating than individual experts, and better at designing things, too.”

Cloudberries decided to test this theory in the bravest way possible – by letting hundreds of puzzlers design the brand’s next jigsaw together. The UK-based company, which specialises in beautiful, eco-friendly puzzles, had no idea how the final puzzle would look. However, they pledged that whatever happened, they would launch the crowdsourced design as a real-life 500-piece puzzle.

“No one has ever tried this before, and we’ve been completely overwhelmed by the response. The final artwork proves that big groups of puzzle nerds just ‘know’ how to make a beautiful jigsaw, even if they’re unable to see each other’s contributions.”

Puzzlers were invited to choose a shape from a predefined grid on cloudberries.co.uk/crowd. Then, they could choose which colour they’d like their section of the puzzle to be. Entries were submitted in isolation, and participants were prevented from seeing which colour neighbouring sections had been given, or whether their submission ‘fitted in’ with the rest of the design.

Once all sections of the puzzle were coloured in, Cloudberries revealed the final design on social media, attracting thousands of likes and comments. The next step is to name the puzzle, and again Cloudberries is asking its fans on social media to suggest names and vote for a winner over the coming days.

“We’re on a mission to rid the world of boring jigsaw puzzles, and whatever the outcome, this new design will be a fun addition to our line of awesome puzzles,” says Vickers.

The pre-sale for the world’s first crowdsourced puzzle will open in November, with the finished 500-piece jigsaws shipping in February 2021. The people who helped design the puzzle will be able to buy it before anyone else, and Cloudberries will – as with all its jigsaw designs – plant a tree for every puzzle sold. All Cloudberries puzzles are made here in Europe with sustainably sourced paper and board.

The crowdsourced puzzle tool can be viewed at https://www.cloudberries.co.uk/crowd.

Founded in the UK, Cloudberries creates beautiful, colourful jigsaw puzzles especially for grown ups. The puzzles are made in Europe with sustainably sourced paper and board, and in January 2020, Cloudberries pledged to plant a tree for every puzzle sold. This helps support reforestation projects in some of the world’s most fragile ecosystems, and provides sustainable, long-term jobs for local communities. You can find out more about Cloudberries and its pledge at: www.cloudberries.co.uk. For more info, pics and quotes, contact lianne@bertellicommunications.co.uk or call 07739 023 756