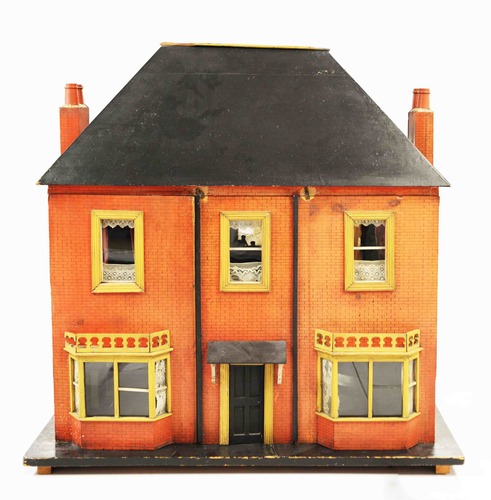 The most important private collection of dolls houses in the north of England is expected to raise in excess of GBP30k when it goes under the hammer next week.

The Catherine ‘Kit’ Hewitt Collection of Dolls Houses, Dolls and Other Toys will be sold by Newcastle’s Anderson & Garland Auctioneers on Tuesday 8 December, when it is expected to attract global interest.

Within the collection are 25 houses estimated to be worth around GBP15k in value. Lot 933, a German two-storey double-bay fronted town house attributed to Christian Hacker and lot 910, a Tudor mansion manufactured by Tri-Ang for Hamleys, each have an estimate of GBP800-GBP1400.

A dolls kitchen with a mangle and other accessories is particularly high quality and expected to sell for up to GBP600.

All the houses were fully furnished by Kit and a booming dolls house furniture market is expected to increase interest in the contents. These have been packaged up into individual lots and are estimated at around GBP20k collectively.

Interestingly, lot 989, an Ysabel Birkbeck, Westacre Dolls’ House Co miniature bureau bookcase valued at GBP60-GBP90 is likely to sell for more than one of its full-size counterparts following a drop in demand for antique furniture.

From Newcastle, Catherine ‘Kit’ Hewitt was a keen collector, who along with her husband had a longstanding interest in antiques. Her interest in dolls were piqued in 1974 when her daughter Sue bought her two as a gift.

Sue Spence said: “Mum had a nose for antiques and immediately took a real interest in the dolls house market. Initially she relied on reference books but then her knowledge became encyclopaedic. She really enjoyed sharing what she was collecting and especially what she had learnt along the way.

“Sadly Mum died in July so the idea that her collection will now go to people equally as passionate as her seems a fitting legacy.”

John Anderson, auctioneer and valuer at Anderson and Garland, said: “I first met Kit over forty years ago when she was already amassing a large and important dolls collection. In my early days here, she would come in and help catalogue sales and was instrumental in developing my area of expertise.

“The market for dolls may have diminished somewhat over the years but Kit had an excellent eye and there are some fairly major dolls houses that we expect to sell far and wide. Her range of 19th century bisque head dolls will no doubt appeal to collectors who enjoy their gothic charm all over the world.

“Kit furnished her dolls houses with a creative eccentricity and there are some wonderful pieces, including a miniature atlas of the British Empire by Edward Stanford Ltd, which measures 42mm x 32mm. I certainly expect the small bric a brac and furniture to attract a wide audience next Tuesday.”

Included within the sale but not part of the Kit Hewitt Collection is lot 954, a 1/12th scale four-storey dolls house known as Ormiston Hall. Estimated at GBP400-GBP600, this has a hinged double panel frontage, which opens to reveal six fully furnished rooms and an attic space interior. The proceeds of this particular lot will be donated to The Hedgehog Hotel Charity.

Anderson added: “Collections like this come up very rarely so it’s a privilege to be able to see each dolls house up close. The closest comparison I can personally think of would be the dolls’ house room at Wallington, but of course that is in public hands being a National Trust property, rather than a private collection.”

For a range of further images or interviews, please contact Sarah Waddington at Astute.Work on 07702 162 704 / sarah@astute.work.

This press release was distributed by ResponseSource Press Release Wire on behalf of Astute.Work in the following categories: Leisure & Hobbies, for more information visit https://pressreleasewire.responsesource.com/about.