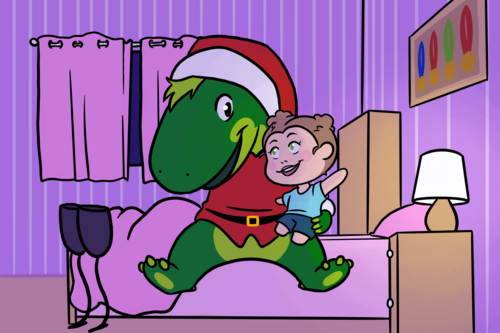 A courageous little girl who fought back after losing all her limbs to meningitis is to feature in a children’s storybook designed to provide comfort this Christmas.

Seven-year-old Harmonie-Rose Allen, of Bath, contracted meningococcal septicaemia as a baby and was given only a 10% chance of survival.

Her arms and legs were amputated, but she survived and now, thanks to prosthetic legs, she loves jumping and skipping and even completed a half-marathon in her home city when she was just five.

An ambassador for the charity Meningitis Now, Harmonie-Rose will feature in the children’s illustrated storybook ‘Covi, the little Christmas dinosaur!’ written by author Susie Cullen and illustrated by Chay Winter.

‘Covi, the little Christmas dinosaur’ launched for pre-sales on November 24th and sale in December, and has already sold over 300 copies.

In the new book, Covi becomes a hero when he stands in for Santa to deliver presents to children during a Christmas lockdown.

When Covi visits Harmonie-Rose, the little girl is wide awake. He pops her on his knee to tell her a magical story of kindness and hope for the world.

Susie said: “Covi is a helpful little dinosaur who came to help the children when the world was stuck by Covid-19.

“As a T-Rex, Covi, like Harmonie-Rose, has limb differences that do not stop him doing anything he wants! As a strong supporter of inclusivity for all, I am thrilled that Harmonie-Rose’s parents agreed I could feature her in the Christmas tale.

“Her own story is such an inspiration, and I hope that other children (and adults) with limb differences will be as pleased as I am to see that dinosaurs and Santa do not discriminate!”

The latest book was commissioned by Singapore-based publisher British Theatre Playhouse in association with Worldwide Entertainment.

Cecilia Leong-Faulkner, chief executive of British Theatre Playhouse, said: “Covi the little green dinosaur is a fantastic character and it’s amazing that we can feature Harmonie-Rose in the story too.

“This year has been very difficult for children with the Covid-19 pandemic, schools being closed and families in lockdown but this story is uplifting and inspirational and can really show children that we can come through this if we are all brave and determined.

“We hope parents, teachers, and, of course, little readers will love Covi's Christmas adventure as much as we’ve enjoyed producing it with Susie.”


For every book sold, 50 pence will be donated to Harmonie-Rose’s charity of choice.

Harmonie-Rose Allen is a meningitis survivor who lost her arms and legs to the dreadful disease at the tender age of just 11 months.

The brave seven-year-old, from Bath, Somerset, was given a ten per cent chance of survival when she was struck with the infectious disease and by the time she was a year old, she was a quadruple amputee and had also lost part of her nose to the illness.

Now, aged 7, she refuses to let her disability hold her back and is a paralympic gymnast, international superstar and the first junior ambassador for charity Meningitis Now.

The British Theatre Playhouse is a professional theatre production company incorporated in Singapore in 2004 and is internationally focused with a strong British connection - a long-standing member of the British Chamber of Commerce in Singapore, and the Patron is the British High Commissioner to Singapore H.E. Kara Owen.

In 2012, The British Theatre Playhouse established a UK branch in order to work more closely with established British playwrights, writers, actors, directors, musical directors, set and costume designers. The company is proud to have produced and presented a series of highly successful British productions in Singapore, Malaysia, Thailand, Sri Lanka, Indonesia, the United Arab Emirates and the UK.

The theatre production company prides itself on high standards equivalent to London’s West End and offers UK casts comprising prominent stage, television and film actors. Every one of BTP shows has featured stars from London’s West End, including Jane Seymour OBE who starred in Noel Coward's The Vortex.

Susie Cullen is an English children's fiction author and inspirational speaker. During the coronavirus lockdown of 2020, Susie joined forces with two young illustrators to publish the first two storybooks in the series, 'The adventures of Covi, the little green dinosaur'. The books are set in the lockdown period whilst the Covid-19 pandemic gripped the world. Whilst the people stay at home, the magical creatures come out to roam...

Since the release of those first two books, Susie has collaborated with the British Playhouse Theatre to write and publish a third book in the series. 'Covi, the little Christmas dinosaur' is a magical tale in which Santa Claus is isolating and cannot make his usual Christmas Eve trip! Of course, our little hero steps in to save the day.

Susie is passionate about supporting and promoting charitable causes and is proud that for every book sold, a donation is made by her publisher to children's charities.

Covi is a little green dinosaur who came to help the children when the world was locked down. Helpful, kind, fun and courageous - little Covi may be small, but he has a HUGE spirit!

The book tells the tale of the locked-down Christmas of 2020 when the pandemic prevented Santa Claus from making his rounds. The helpful little dinosaur stepped in to save the day and Christmas was saved!

The storybook is beautifully illustrated and is written in rhyme to make it really good fun to read out loud!

The toys were packed and ready to go with Santa’s list of children’s names.

The reindeer were tethered to the sleigh, and little Covi took the reins!

“Good luck, fly safe and come back soon”, Santa shouted at them goodbye.

And the magical sleigh and dinosaur took off into the sky.

Flowing rhythmical text that makes it ideal for reading aloud

Enchanting characters which are fun to act out