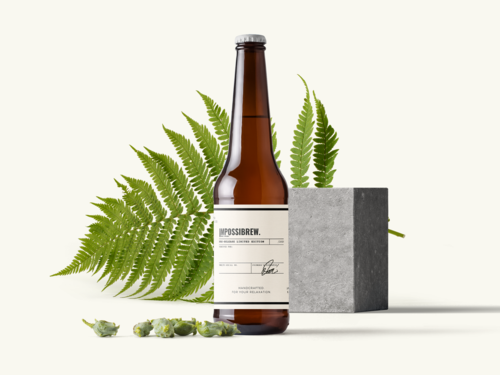 THE UK’s first ‘feel-good’ alcohol-free beer has been launched by drinks startup entrepreneur Mark Wong and his team of plant scientists.

Frustrated with alcohol-free alternatives that do nothing but mimic the taste and flavour of alcohol, Mark, 24, the founder of IMPOSSIBREW Co., started experimenting with active botanical plants used by his ancestors in Asia.

With an academic background in alcoholic drinks and his team of plant scientists, he reached the perfect blend of ‘feel-good’ herbs after repeatedly experimenting on himself for 2 years while studying a degree in Durham University. They have now created a truly satisfying alternative to alcohol that is brewed for relaxation and sociability.

“During my studies in alcohol, I’ve always wondered why drinks are either alcoholic or alcohol-free. It seems odd that there’s nothing in the middle.”

“The quest for an alcohol alternative really began when I was advised to stop drinking by my doctor because of worrying blood test results. As I have immersed myself in the alcohol industry since I was 18, stopping drinking was not something easy to accept.”

“Accidentally coming across a copy of The Kissa Yōjōki (喫茶養生記), published in 1211 AD, changed everything. I became obsessed with active botanical plants that have been used for thousands of years in my culture and self-experimented with as many as I could get my hands on.”

“With our team of plant scientists and experts across leading UK Universities, we presented our findings to the industry but was met with scepticism. One brewer told us what we were looking for was impossible. It motivated us even more, and we have decided to name ourselves in tribute to it - brewing the impossible.”

Made with IMPOSSIBREW’s Proprietary Blend of active natural botanicals, including L-Theanine and others, IMPOSSIBREW Lager offers beer-lovers the choice of going alcohol-free without compromising the senses.

It is low-calorie, low-sugar, gluten-free, vegan-friendly, alcohol-free and most importantly, hangover-free.


The disruptive alcohol-free beer was unveiled just this week online despite an ongoing pandemic.

With their 1st pre-release sold out within just 2 days of their website going live, IMPOSSIBREW Co. is looking to offer its commercial retail version later in the summer of 2021 with a competitive price.

With more than 86% of global drinkers looking to reduce their alcohol consumption and the majority of them being beer-drinkers, IMPOSSIBREW Co. is looking to fill that gap with a healthy functional alcohol alternative, brewed for relaxation without the booze.

The Pre-Release limited edition is now available for pre-order exclusively at impossibrew.co, a special hand-signed edition for early-adopters at 9.99GBP.