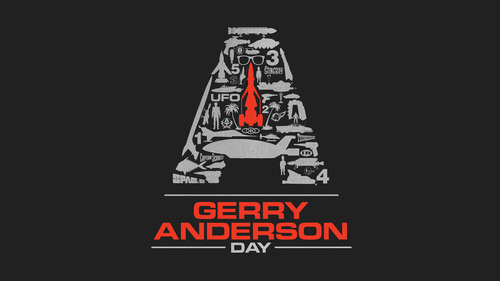 Online events, special product releases and content , appearances by celebrity fans, and much, much more planned for 14th of April celebration of Thunderbirds creator

The 14th of April is an important date for Gerry Anderson fans – it’s the birthday of one of the entertainment world’s most creative and innovative programme-makers – the man behind such iconic shows as Fireball XL5, Thunderbirds, UFO, Space:1999, Terrahawks, Space Precinct, Captain Scarlet and many more – some of the best -loved sci-fi favourites from the past six decades.

But this year the 14th of April is even more significant: it’s the date of the first-ever international Gerry Anderson Day.

Celebrating the life and works of the legendary producer, Gerry Anderson Day will be a bonanza for fans of all ages everywhere, featuring special events, live streams, unique new content from Gerry’s own production company Anderson Entertainment, one-off and limited edition products, and a special YouTube programme.

There are also guest appearances planned from some very big-name celebrity fans. Expect some fun – and a lot of surprises – finding out who they are!

The timing of Gerry Anderson Day is perfect in what is looking like one of the biggest years ever for the company that Gerry founded. More and more of Gerry’s classic shows are appearing on TV and streaming services. Thunderbirds, Fireball XL5, Stingray, UFO and Anderson Entertainment’s 2005 reinvention of Captain Scarlet, as well as many other favourites, continue to enjoy strong sales on DVD and Blu-Ray.

New series are on the way too, overseen by Gerry’s son Jamie, himself a celebrated writer and producer and MD of Anderson Entertainment, including the brand-new sci-fi drama Firestorm and a reboot of 80s hit Terrahawks. The second series of the popular audio drama hit First Action Bureau – developed and produced during the spring lockdown – will also arrive this year. Series one has just been released on CD.

All in all, there’s a lot to celebrate on Gerry Anderson Day – and a lot of celebrating going on! Check out anderson-entertainment.co.uk for updates on the big day!


About Anderson Entertainment
Anderson Entertainment is a content production company set up by the late Gerry Anderson, creator of Supercar, Fireball XL5, Stingray, Thunderbirds, Thunderbirds Are Go, Captain Scarlet And The Mysterons, Thunderbird 6, Joe 90 and The Secret Service, along with live-action productions Doppelgänger, UFO, The Protectors, Space:1999 and The Day After Tomorrow, as well as the more recent Terrahawks, Dick Spanner, Space Precinct, Lavender Castle and New Captain Scarlet. Today, with Gerry’s son Jamie, a respected writer and producer, as its managing director, the company develops its own IP and projects from Gerry Anderson’s personal archive and manages Gerry Anderson’s estate and existing works. Anderson Entertainment has also developed brand-new content for delivery across a variety of viewing and audio platforms and has an ecommerce offering – the Official Gerry Anderson Store – which makes official and exclusive merchandise available to Anderson fans across the globe. www.anderson-entertainment.co.uk