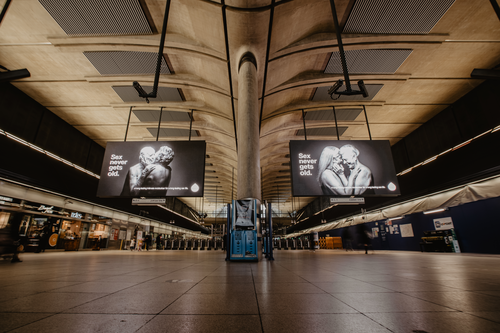 
Replens™ the clinically tested, number one vaginal moisturiser GP recommended brand*, has just won the third annual Transport for London Diversity in Advertising Competition with their latest campaign, Sex Never Gets Old, which features a diverse group of older people, with a range of ethnicities, ages and sexualities, within beautiful, emotional portraits of couples. These emotive portraits highlight that many people continue to enjoy sex and intimacy well into their sixties and beyond.

New research by Replens™ has found that half (48%) of UK adults over 60 feel more confident in their sexual relationships than ever before, with one in five (19%) revealing they are much more confident now than when they were younger.

The Flames of Sex and Intimacy survey, conducted by OnePoll, quizzed 1200 people aged 60 and above about their sex lives. The report discovered that:

• 39% of adults aged 60 or over say sex continues to be an important part of their relationships
• 45% say they are more at ease with sex and intimacy with the passing years, with 22% describing themselves as much more at ease

Sex and relationships expert Tracey Cox adds,
“Very few 60-year-olds are stepping back from a lusty life and heading outside to the garden. They’re continuing to enjoy a healthy, fulfilled sex life – and will do for many years on. Today’s post 60’s, are the Baby Boomers. They’re affluent, educated and tend to have a positive view of the world. It makes sense that they feel younger and are less inclined to consider themselves ‘past it’. They’re the sex and rock’n’roll generation: hedonists who aren’t afraid to push boundaries.”

Tracey continues,
“There’s a confidence that comes with age and experience. You worry less about what people think, you know your body and your sexual triggers and you’re not afraid to ask for what you want. The older you are, the less likely you are to worry your partner might judge you for asking for something a little risqué. Lots of mid-lifers are more sexually adventurous than they’ve ever been. Sex and intimacy keep you young – and this is why campaigns like ‘Sex Never Gets Old’ are so important. Couples who have regular sex feel more connected to their partner and rate their relationship happiness much higher than couples who don’t. keeps us happy, it keeps us close, why on earth would we want to let sex or intimacy disappear from our lives?”

So as part of the Flames of Sex and Intimacy survey Replens™ also delved into the way the over-60s feel they are seen by society as a whole.

More than half (53%) of those surveyed believe society has a negative view of people of their age enjoying sex and intimacy, while 65% say they feel underrepresented in advertising. Tracey comments,
“Who decided sex was only for the young? The type of sex you have when you’re older might not look like the sex you had in your 20s but it’s just as enjoyable. Young sex isn’t better sex, it’s just different sex. Lots of older couples rate sex as more satisfying as they get older. This campaign is both pertinent and important. I think advertisers and the media are missing a trick to make 65% of over 60s feel underrepresented. This generation aren’t the wallflowers of society. They’re big consumers, they have money to spend and they’re keen to maintain an attractive appearance and persona. They’re a vital and important part of society which should be reflected positively in the media. Western society could learn a thing or two from the Eastern cultures who respect the older generation and see them as a source of great wisdom.”


In fact, just 5% feel seen in a positive light and only 9% disagree with the suggestion that their age group is under-represented. Photographer, Allan Mestel, who worked on the campaign says,
Advertising generally glorifies the physical perfection of youth and treats ageing as a process to be fought and disguised. The images we created for this campaign celebrate ageing and reinforce the fact that the flames of sex, intimacy and passion burn just as intensely in our later years as they do in our youth."

Replens™ is the clinically tested, number one vaginal moisturiser GP recommended brand* to relieve vaginal dryness, a condition which can be seen as an inhibitor to sexual intimacy post menopause. Through this campaign Replens™ hopes to raise awareness and encourage positive engagement in the women’s intimate health category. On behalf of Replens™, Rossana Doldi, Head of Healthcare, Church & Dwight UK Ltd, comments,
“Our research has found that many people continue to enjoy an active and fulfilling sex life after the age of 60. Through this research and our advertising campaign we hope to give people the confidence to view their older selves more positively and inspire a long-lasting sex life!”

About Replens™
Replens™ - a long-lasting, intimate moisturiser for a long-lasting sex life.
Replens™ is the clinically tested, number one vaginal moisturiser GP recommended brand*. Apply Replens™ as needed to supplement your body’s natural lubrication to help alleviate the feminine discomfort associated with vaginal dryness. Around 17% of women aged 18-50 experience problems with vaginal dryness during sex, even before the menopause takes place and up to 50% of post-menopausal women (Menopause Matters survey 2006).

For samples or high-res images, please contact Replens™ at Capsule Comms on replens@capsulecomms.com or call 0207 580 4312
Church and Dwight UK Ltd is part of Church & Dwight Co. Inc. based in Princeton, New Jersey, USA and listed on the New York Stock Exchange. Church & Dwight Co., Inc., is a $3.5 billion company, founded in 1846 and is a leader in the fast -growing consumer products and personal care industry, with brands such as Batiste, Nair, Waterpik, Anusol, Sterimar and Arm & Hammer.