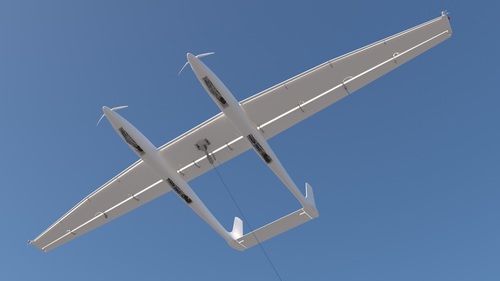 Leading renewable energy consultancy and service provider, Natural Power, has secured planning consent on behalf of RWE to develop a first of its kind demonstration site in County Mayo, Ireland, that will test new airborne wind energy systems (AWES). Construction of the site infrastructure is expected to begin later this year.

Seán Manley, Country Director at Natural Power, said: “Natural Power has been involved in this project for a number of years and is delighted to have secured planning consent on behalf of RWE for this innovative AWES technology. We wish RWE all the best during the construction phase and developing the AWES technology to commercial scale.”

Airborne wind energy systems harness the strong and steady winds at altitudes greater than several hundred metres. The system being tested by RWE consists of a ground-based winch generator, a launch and land platform, and small, aircraft-shaped device.

The device, which has a 12-metre (about 40 feet) wingspan, is connected to the generator by an ultra-strong tether. It draws the tether from the winch and produces electricity by acting against the resistance of the built-in generator. Once the tether is fully extended, the device glides back towards the winch, as the tether is reeled back in. Retrieving the tether requires just a fraction of the energy generated, resulting in net power production. This cycle is performed repeatedly, producing clean, low-cost energy. Current airborne wind energy systems demonstrators have power output capacities between 100 and 200 kW.