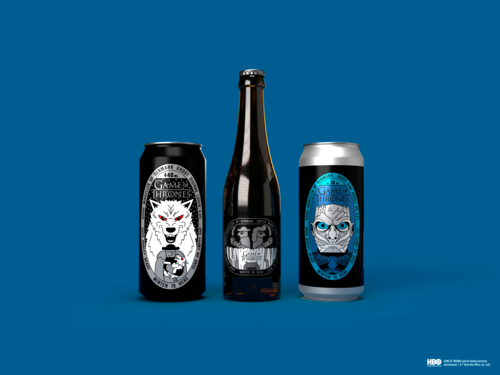 On the occasion of Game of Thrones' 10-year anniversary this spring, the Danish brewery and Warner Bros. Consumer Products (WBCP) came together to launch the exclusive ‘Iron Anniversary IPA’. Now the brewery and WBCP are ready with a series of three new beers that pay homage to the characters and the long winters in the series' icy north.

Night King Double IPA, Ghost Visions Lager and Castle Black Stout are the names of the three beers that together celebrate and pay tribute to the snow-capped North, from the world-famous HBO series Game of Thrones. The beers are based on the common theme ‘Winter is Here’ and are based on central places and characters from the series' universe.

"As the beers are launched right up to winter, and winter plays a significant role in Game of Thrones, it made sense to find inspiration for the beers in Westeros' frozen, dark world," says Mikkel Bjergsø, founder and creative director of Mikkeller.

Based on the winter theme, Mikkeller's team developed beer styles and decided to make three very different beers that, through recipes and designs, support the series' imaginative stories: a fruity New England double IPA, a clean, light and fresh lager and a full-bodied barrel-aged imperial stout.

(Lager, 4.5% vol.) Inspired by one of a total of six direwolfs, which are found by the Stark family in the first episode of the series and subsequently adopted and raised by Jon Snow. Ghost is an albino wolf and Snow's faithful companion.

(bourbon barrel aged imperial oatmeal stout, 11.3% vol) Inspired by the bastion of The Night’s Watch; the torn army that is to protect the Seven Kingdoms from all threats from the cold North and the mythical White Walkers led by the Night King. Castle Black is the central of a total of three manned castles left along the massive ice wall that separates Westeros from the Land of Always Winter.


The three new Game of Thrones inspired beers are expected to be launched on October 15th in major markets such as Sweden, UK, US, France, Italy, Germany, Ireland and South Korea. They will also be available through Mikkeller’s webshop: https://shop.mikkeller.dk

Exclusive merchandise and gift sets will be available in Mikkeller’s webshop https://shop.mikkeller.dk/ and exclusive limited gift packs can be purchased in selected retail stores in Denmark, the US and UK.

Mikkeller is the adventurous story of a beer loving Danish math- and physics teacher, who started experimenting with hops, malt and yeast in his small kitchen in Copenhagen. Today he exports his craft beer to 50 countries, with just as many Mikkeller locations around the Globe. His inventive and constant development of Mikkeller has resulted in a brewery internationally acclaimed for innovation and quality. A Key element of Mikkeller’s brand is collaboration. From world renowned Michelin restaurants and other amazing breweries to design brands, wineries, artists and rock stars, we pride ourselves in working with the best of the best. Previous collaborations include David Lynch, B&O, The Danish Refugee Council, The National, Rick Astley, Scandinavian Airlines, Mastodon, Uerige, Gaffel, Noma, El Cellar de can Roca, Weingut Meierer, Burger King and many more.

Warner Bros. Consumer Products, part of Warner Bros. Global Brands and Experiences, extends the Studio’s powerful portfolio of entertainment brands and franchises into the lives of fans around the world. WBCP partners with best-in-class licensees globally on an award-winning range of toys, fashion, home décor, and publishing inspired by franchises and properties such as DC, Wizarding World, Looney Tunes, Hanna-Barbera, HBO, Cartoon Network and Adult Swim. The division’s successful global themed entertainment business includes groundbreaking experiences such as The Wizarding World of Harry Potter and Warner Bros. World Abu Dhabi. With innovative global licensing and merchandising programs, retail initiatives, promotional partnerships and themed experiences, WBCP is one of the leading licensing and retail merchandising organisations in the world.