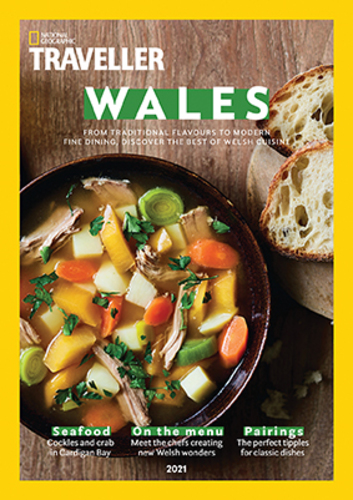 National Geographic Traveller (UK) has teamed up with Food & Drink Wales to launch a new multi-stage initiative designed to showcase the country as a culinary destination.

The project is centred around a new 52-page food-focused guide to Wales, which was sponsored by Food & Drink Wales and distributed with the October edition of National Geographic Traveller — the first time a culinary guide has been distributed with the magazine in its 10-year history.

The guide, which was overseen by Glen Mutel, the editor of the magazine’s quarterly special edition, National Geographic Traveller Food (UK), looks at all aspects of Wales’s culinary offering, from its traditional recipes and native ingredients to its Michelin-starred restaurants and its new wave of artisan producers.

In addition, the guide will be distributed at BlasCymru / TasteWales 2021, Wales’s premier international food and drink event, which will take place on 27 and 28 October at the International Convention Centre Wales, in Newport. National Geographic Traveller is sponsoring the Tourism Zone at the event, which will bring together producers, buyers and professionals from across the food industry.

Glen said: “The Wales guide was a great project to work on, simply because Wales has such a good story to tell these days when it comes to food and drink. It’s a country that’s always been known for its landscapes, but now it’s really taking pride in what’s being produced among these famous hills, valleys, sea cliffs and mountains and how these world-class ingredients are being transformed by a new generation of Welsh chefs.

“It’s also very satisfying to know that the guide will be distributed at BlasCymru / TasteWales 2021, given that so many of the people who’ve helped propel the country’s culinary scene forward will be gathered there.”

Commenting on the collaboration the Welsh Government’s Rural Affairs and North Wales, and Trefnydd Minister, Lesley Griffiths MS, said: “This is a fantastic collaboration with National Geographic Traveller and a great platform to show the food culture we have in Wales.

“We have a long and proud tradition of producing outstanding food and drink, with an abundance of natural resources and food ingredients, and a concerted focus on developing new technologies and innovation in food production.”