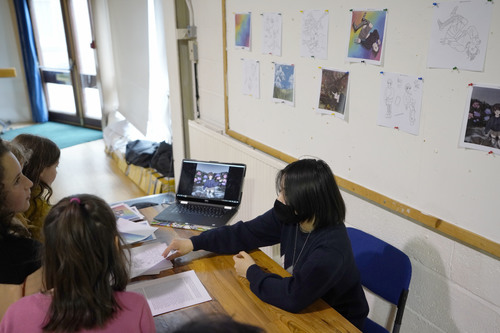 Edinburgh pupils are the first in Scotland to receive an innovative, interdisciplinary qualification, equivalent to two Nat 5s, that has no exam.

Beginning in 2019, the pilot group of then 13 – 14-year-olds from Edinburgh Steiner School undertook the first module of the qualification, an in-depth research investigation on a topic of their choosing.

In ordinary times they would put up an exhibition of their projects for the school community to view the fruits of their labour, but weeks before the scheduled event, Scotland went into lockdown, closing schools. Undeterred, the pupils learnt how to build a web page from scratch to showcase their work virtually.

A year on, against a backdrop of what would have been prelim season for tens of thousands of pupils across Scotland, the second cohort of IE pupils exhibited their projects in the school hall, used ordinarily to sit SQA exams. An online exhibition opened it up to the wider body of parents, who remain off campus.

This month, Ofqual-regulated awarding body, Crossfields Institute, presented 14 more pupils with the Award Certificate, in recognition of the Independent Project
Module. Freya, Sally, Riley, Lily-Rose, Noah, Billy, Luca, Ali, Dylan, Theo, Bella, Sula, James and Camilla can continue this year on to the Creative Thinking Skills module, after which they will gain the full accreditation of the Integrated Education Certificate Level 2.

Whilst the qualifications are open to all schools, both in the UK and internationally, the two Waldorf schools in the capital and Forres are the only centres for the delivery of Integrated Education in Scotland at present.

The year-long projects have been part of the school curriculum at flagship Edinburgh Steiner School for over 25 years, though this is the first time they are being formally recognised and accredited by an independent body. It is the first centre to have delivered accreditation for any of the Integrated Education programmes. More amazingly, all of the pupils were a whole year younger than the specified age for this qualification and level of study, such is their capacity for focused, self-directed activity.

For all media queries:

These Certificates come in the wake of the OECD’s review of Curriculum for Excellence earlier this year, and the prospect of changes at all levels of Scottish education in the future. Organisation for Economic Co-operation and Development (OECD) regards Scotland as a “pioneer” in curriculum reform, praising CfE for its “bold, aspirational, value-driven and future-oriented approach”, underlining that the “basic ideas of CfE are still valid” and “inspiring”; yet found ‘misalignment' between qualifications system and wider goals of Curriculum for Excellence (CfE).

The damning report of the Scottish education system, in particular its exam delivery, led Cabinet Secretary for Education and Skills, Shirley-Anne Somerville, to scrap the SQA; and there were calls for alternative methodologies into the way senior pupils are assessed.

Addressing the Scottish Parliament recently, Sommerville nevertheless stated that whilst she is in support of qualifications reform, “externally assessed examination will remain part of the new system”.

UN Agenda for Transforming our world: the 2030 Agenda for Sustainable Development was agreed in 2015. It was a plan of action for people, planet and prosperity, with seventeen identified goals to address the most pressing global problems facing both the current and future generations. It informs educational policies.

Within this document, the words ‘innovation’ and ‘innovative’ appear twenty-six times, particularly in relation to the needs of science, technology, infrastructure and economic growth. But, curiously, these words do not appear anywhere in Goal 4: education provision or aims.

The IEC is the first of a suite of qualifications, derived from a three-year multinational research project, known as Acknowledging Creative Thinking Skills project (ACTS). In 2015, a team of educators, especially Steiner Waldorf teachers, from around the world collaborated to redress the global crisis in education.

Feeling stifled by the requirement to force-feed knowledge to stressed and fatigued teenagers, seeking a far more inclusive and less invasive form of assessing the pupils' skills than the standard exam system, and recognising that assessment by exams does not necessarily give an accurate or complete picture of pupils’ achievements and abilities, the ACTS team weigh in on what children need to navigate the challenges of the 21st Century.

The project was generously funded by the European Union via Erasmus+ and attracted Nobel Laureate in Neuroscience Thomas Sudhof as its patron.

It spearheaded the development of a suite of unique, truly interdisciplinary ‘portfolio’ qualifications, known as Integrated Education, which are now on the OfQual register at RQF Level 2 (equivalent to National 5) and Level 3 (equivalent to Advanced Higher).

The project also led to the founding of a successful postgraduate teacher training course, which is now based in the UK, Denmark and Finland.

This suite of alternative qualifications gives pupils the same passport to access further education and work as current national exams.

Still the fastest growing independent education movement worldwide, now with over 1,200 schools and 2,000 Kindergartens on every habitable continent, Steiner education aims to develop the thinking activity that has the capacity to find solutions rather than only knowing facts, so that they can begin to ask questions that have never been asked before and open new findings.

As a small, independent school with a progressive ethos, ESS starts formal education at age 6; does not select pupils on the basis of ability; nor formally assesses its pupils until around age 15.

The holistic Steiner Waldorf curriculum has always been broadly compatible with the core principles of CfE. Indeed, Edinburgh Steiner School was asked to advise mainstream schools on aspects of its implementation. A decade on, it hopes to again share what it has learned in the course of developing and introducing Integrated Education, as part of the forthcoming conversation about the future of post-16 learning and assessment in Scotland.

These qualifications, now an established part of the qualifications framework following several years of piloting the Certificate, hope to help pupils engage with education again, and achieve their potential in a way that makes their learning visible and able to be evaluated beyond the gates of a Steiner campus.

“We are deeply committed to developing new and innovative approaches to meeting pupils’ wide range of needs.

Although almost all our pupils take and sit exams, with results that place us in the top performing Scottish schools taking Highers, we have always believed that these forms of assessment are quite one-dimensional and sometimes ill-suited to the core values of our education.”

“I spent my entire school education in the Waldorf system. When I emerged from it, I’m sure I wasn’t as well trained in many of the STEM systems. But I don’t think that matters.

In particular, I feel that today’s education, at every level — certainly in school, but even in college — is way too much focused on the so called “STEM subjects”: science, technology, engineering and math.

The fear that we may become illiterate in those subjects, is probably well founded, but you can’t just cram it into people. It’s not productive, and certainly not in young children. So I think that fostering creative thinking and individual initiative early on is tremendously positive.


Elaine Holt, ACTS Founder
“The pressures to achieve within an exam-based system inevitably devalue time spent on integrating other important learning opportunities. Those students whose learning styles do not sit well with formal learning and summative exam assessments are at greater risk of becoming disillusioned, disengaged, stressed and even disruptive.

Even those who are well-suited to formal learning in the teenage years are not best served in an exam-driven environment that is necessarily backward-looking and based upon what was important some years previously when the exam criteria were set, rather than providing preparation for acting in an increasingly complex and uncertain world.

More damaging still is the way the current system places undue stress upon finite fact regurgitation and training to pass exams, rather than creative understanding and engagement with principles as continually developing concepts.”