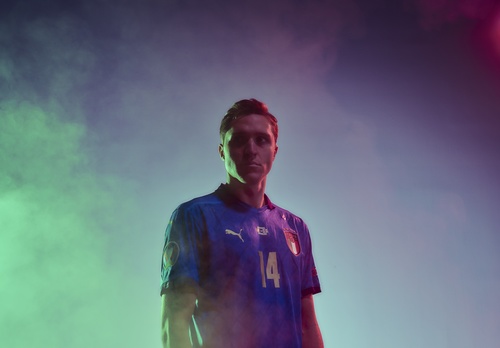 Today a new and ground-breaking NFT platform Kreation.io (built on the Solana Blockchain platform) announces their forthcoming launch featuring a unique collaboration with Juventus and Azzurri football star, Federico Chiesa. A rare and collectible NFT designed by Chiesa and inspired by his experiences and victory of the recent European Championship (EURO 2020), will be auctioned on the Kreation platform on 29 December 2021 at 3pm UTC (auction ends 12 January 2022).

Federico Chiesa says about NFTs and his genesis drop, “I had been following NFTs for some time and been fascinated by the explosion of this market. So, when Kreation offered me this special opportunity to become one of the first footballers in the world to release my own NFTs, of course, I was delighted to venture into this collaboration.”

The drop will be a unique 1/1 licensed Federico Chiesa NFT, with a reserve set at 20 SOL. The winning bid and 4 closest bids will receive the Azzurri’s Euro 2020 championship shirt signed by Chiesa.

Kreation is the latest innovation in the art / crypto space by HOFA Gallery. It will bring NFTs before a global audience, and make it accessible for investors of all kinds to join in collecting them. The platform will harness cutting-edge technology for security and authentication, while also utilising the blockchain’s automation for rapid, secure efficient sales and settlements. HOFA also launches an original cryptocurrency called Artem Coin (ARTEM) on 28 December 2021, which will enable liquidity and incentives for Kreation users.

Kreation Co-Founder & CEO Elio D’Anna says “Kreation is honoured to partner with Juventus football hero Federico Chiesa. The value of any digital artwork, and the NFT securing that asset, is always the story behind it. And Chiesa’s NFTs are the story of his meteoric rise in football to his encounters at 2020’s European Championship. Each one of these unique NFTs tells his own story, beginning with this genesis drop – the first chapter!”


Kreation Co-Founder & Creative Director Jake Elias adds, “This is just the start, we have already planned monthly drops with other huge football, sports and entertainment legends. Kreation is firmly positioning itself as the leading NFT marketplace for the future.”


Kreation Co-Founder & Creative Director Jake Elias adds, “This is just the start, we have already planned monthly drops with other huge football, sports and entertainment legends. Kreation is firmly positioning itself as the leading NFT marketplace for the future.”


Disclaimer: This collaboration is between HOFA Gallery / Kreation and Federico Chiesa directly. The collaboration is not connected with UEFA, Juventus or Azzuri and or any of its associated companies.

2018 – HOFA became the first gallery in the world to accept cryptocurrency as a form of payment, available in 21 different cryptocurrencies in partnership with leading exchange Uphold. (Article by Forbes)

2020 - HOFA launches its own virtual reality program with its own developed technology and is featured as one of the first galleries to launch their virtuality program alongisde Tate Modern, The British Museum and The National Gallery.
(Article by Forbes).

September 2021 - HOFA announces ‘Portrait of an Era’ billed as the world’s most valuable gallery NFT exhibition ever, with CryptoPunks and BAYC headlining. The same night it announces its ground-breaking mobile App. (Article by Christie's International)

September 2021 - HOFA mints and auctions its first set of artworks on its own smart contract and NFT platform HOFA.io, which is built on the Ethereum Network and founded with sustainable ethics. The HOFA.io platform does not strictly require a crypto wallet to acquire digital art, as the platform accepts multiple forms of payments including cards and wires. This hybrid version has a lower impact on the environment by reducing its carbon footprint. It also opens the NFT space to collectors of every age and background (article by Christie's International).