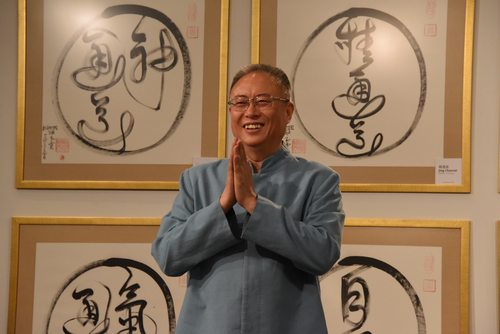 The original artwork has a significant value and was featured at Art Miami Basel.

One of the first-ever Chinese calligraphies to be created as an NFT, Master Sha’s calligraphies create a powerful vibrational field that carries positive energy and messages that transform life. His unique one-stroke calligraphy NFT artwork transcends art to enhance finances and careers and overall wellbeing.

Chinese calligraphy has been revered for centuries as a meditation in motion that nurtures health and success in life. Master Sha is in a lineage going back to the teacher of the last Chinese emperor and royal family.

He has converted his revered “Tao Ye Chang Sheng” calligraphy for financial flourishing into a digital NFT format so that more people “can embrace an abundance of positive blessings and boost their financial success,” simply by tracing the digital painting with five fingers every day.

Open your mind to consider the reports of the benefits of this transformative art. One recent purchaser of the NFT credits the digital calligraphy for being behind her recent $90,000 insurance settlement. Another Toronto-based woman, said that her music therapy business generated $2,500 in a weekend - which she usually achieves in a month.

A whole host of people have praised the impact of owning the NFT, including David Meltzer, Top 100 Business Coach, host of Entrepreneur.com’s “The Playbook Podcast,” and former CEO of the renowned Leigh Steinberg Sports & Entertainment agency, the inspiration behind the movie Jerry Maguire.

David Meltzer has represented Hall of Fame athletes and interviewed the likes of Gary Vee and Jordan Belfort, and he swears by the power of Master Sha’s calligraphy, claiming that tracing the calligraphies has been instrumental in his immense financial and business success and overall well-being.

Here is what happened in his life by tracing Master Sha’s calligraphy:

“I didn’t initially believe that spiritual calligraphies and vibration and frequency could benefit me in any way. I was extremely sceptical. But, as soon as I began to trace his calligraphies for ten minutes a day, my life started to change. And it changed dramatically. My business and finances, my health, my relationships, my perspective, my mindset - they all improved.

The calligraphies work. And if you have an open mind and open heart, they will most likely work for you too.”

Dr & Master Zhi Gang Sha plans to release new NFTs of his transformative calligraphy art in the future, following the great popularity of his first NFT for financial abundance and flourishing. In 2020, Master Sha received the Top Spiritual Innovator of the Year Award from the International Association of Top Professionals.