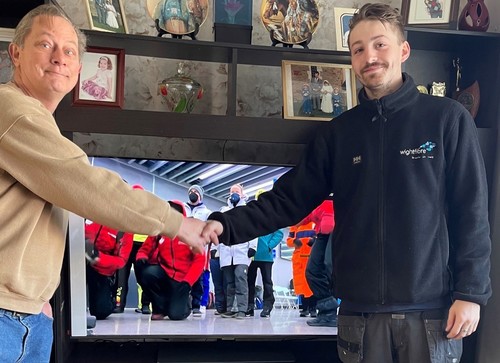 WightFibre’s 10,000th customer, Mr Charlton, from Ryde was delighted to receive a brand new Samsung tv from WightFibre as a surprise gift after his recent switch to a full-fibre broadband connection from WightFibre. WightFibre surprised Mr Charlton with the gift to mark this milestone in the company’s new full-fibre rollout.

Mr Charlton, said, “I was extremely delighted to learn that I was WightFibre's 10,000th Broadband Customer, and that as a reward WightFibre have given me completely free of charge one of the latest Samsung 50" Smart Tv's. So now I will be able to really appreciate WightFibre's blazingly fast Broadband speeds".

John Irvine, CEO of WightFibre, said the connection of WightFibre’s 10,000th customer shows WightFibre is well on its’ way to becoming the No 1 broadband provider on the Island, “I am humbled that over 10,000 homes and businesses on the Island are placing their trust in WightFibre to deliver what is now an essential service for most households. Our new full-fibre, future-proof network is second to none on the planet and this, coupled with our very high levels of customer care is giving customers what they want – fast reliable broadband that just works.”

WightFibre recently received the Institute of Customer Service, Service Mark with Distinction, an accolade held by only 16 other companies in the UK. Irvine said this is an independent verification of WightFibre’s high levels of customer care, “WightFibre’s high levels of customer care are just as important as the quality of our full-fibre broadband, we take pride in going the extra mile for our customers”.

WightFibre’s full-fibre network is now available to 35,000 homes on the Island. Work is now underway in the harder to reach parts of the Island including Ventnor, Freshwater, Totland, St Helens, Seaview, Bembridge and Brading. Service is expected to launch in Ventnor in March.

A description of the benefits of full-fibre broadband versus copper based broadband together with supporting graphics can be found here. www.wightfibre.com/full-fibre

Since 2001, WightFibre has owned and operated its’ own telecommunications infrastructure entirely independently of BT Openreach. WightFibre provides phone, tv and broadband services to homes and businesses on the Isle of Wight. Only WightFibre is committed to building a full-fibre broadband network across the whole Island.

The WightFibre Gigabit Island Project will see full-fibre broadband deployed to around 75,000 homes and business across the Island by 2023 and is already available to over 35,000 households. The scale of this significant civil engineering project is reflected in figures that show how 500 Kilometers of trenches will be dug, containing 5 million meters of duct and 750 million meters of fibre-optic cable as this full-fibre, ultrafast and future-proof broadband network continues to roll out across the Island, including areas not previously served by WightFibre. www.wightfibre.com

Those interested in receiving the new gigabit broadband services can apply online at www.wightfibre.com