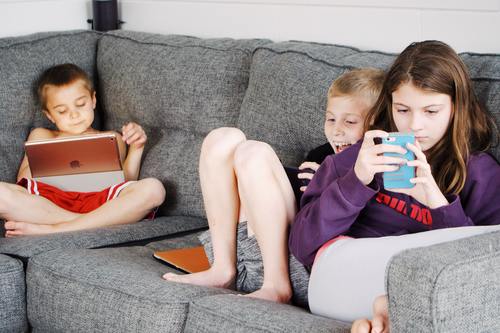 Parents in the UK are finding it difficult to manage the costs of buying the mobile phones that their children ask for as living costs increase, according to new research.

A new study published by refurbished mobile phone website, Swycha, which interviewed 2000 parents with children aged 4 – 22, has uncovered purchasing habits on children’s phones in the UK.

Fewer parents now gift second-hand phones to their children as they face pressure to buy the new devices that their children ask for to keep up with their friends and trends, the research shows.

71% of UK parents say they have bought a brand-new phone for their child in the last two years.

According to the research, 1 in 3 parents say that paying their child’s mobile phone contract has become difficult due to the rising living costs in the UK.

Only 14% of children in the UK now have a pay-as-you-go phone sim card according to the survey.

The study also found that children are now on average age 10 when they are gifted their first phone (typically just before beginning secondary education in the UK).

But why such high expenditure on children’s phones?

As an explanation - it seems the days of passing down second hand phones to children (such as used iPhones or the iconic Nokia 3310) has gone; 71% of parents in the UK say they have bought a brand-new phone for their child in the last two years.

Only 15% of parents choose to gift a second hand phone to their child from a family member or friend.

39% of parents said they paid over £200 upfront for their child’s phone in the last two years.

With a limited number of parents gifting second-hand devices, most parents in the UK (37%) say they bought brand-new handsets for their children from mobile network providers such as Vodafone or EE. 22% of parents buy brand-new handsets for their children from electrical retailers such as Currys or Argos. 14% buy direct from manufacturers (i.e., the Apple Store).

24% of parents have upgraded their child’s phone more than 3 times in the child’s lifetime. Only 7% of parents purchased from a refurbished mobile phone website offering refurbished Iphones.

Buying phones for children has become more a fashionable present and less a necessity.

41% of parents say they bought a new phone for their child’s most recent Birthday or Christmas.

Half of parents buy the exact model of phone their children want because they say the financial cost outweighs the emotion of disappointing them. 46% of children ask for a particular model of phone (such as an iPhone 13) to fit in with their friends or keep up with the latest trends.

43% of parents say they bought new phones for birthdays or Christmas despite knowing “they can’t really afford them”, as opposed to gifting second-hand devices.

Increased spend on children’s phones coincides with a time where parents are facing increasingly squeezed incomes due to the UK cost of living crisis.

Three in four parents in the UK say they are finding it hard to manage rising living costs and still afford food, clothes, clubs, presents etc for their children, according to Swycha’s research.

An anonymous father of two told researchers: “I am having to tell my kids that they will have to do without as the latest models of phone they ask for – I can’t afford them right now. I know new models come out and that children want the newer models when it’s time for an upgrade, but I can't afford them every time. Right now, I'm having to cut back on my own hobbies and o certain clothes. Affording things is getting ridiculous”

An anonymous mother of two told researchers: “Because of costs skyrocketing, we have cut back on absolutely everything at the moment. We have switched food brands to cheaper store brand alternatives and are buying second hand clothes instead of new. We are rationing the heating also.”

Tom Newbald, Chief Executive Officer of Swycha, said: “From our research it’s clear to see that as a parent right now, it’s increasingly hard to buy affordable, yet quality phones for children and still manage all of the other costs that are skyrocketing. More parents are buying brand-new devices as opposed to opting to buy a refurbished mobile phone for their children from alternative websites.”

For further information, imagery or to request an interview, please email benjamin@igniyte.com or 07581455969.

Swycha are an environmentally focused refurbished mobile phone website, based in Jersey, UK.

They recycle, independently test and fully refurbished used Iphones. They help people in the UK enjoy environmentally friendly and affordable second-hand mobile phones at lower prices whilst also helping the planet by slowing down the volume of e-waste.