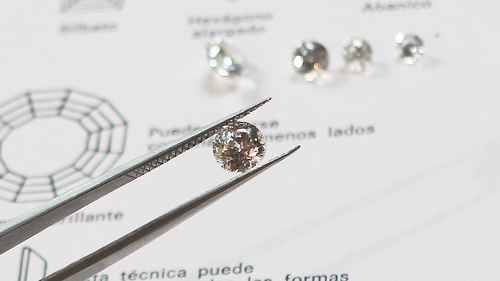 As an ethical jewellery brand, we stand strongly against precious materials that facilitate exploitation or conflict of any kind. Lebrusan Studio calls on the jewellery industry to join us in taking an active stance against Russian conflict diamonds, which are currently funding Putin’s war on Ukraine.

On the 24th February 2022 we, like the rest of the world, looked on in devastation as Russia initiated its war on Ukraine; the largest conventional military attack in Europe since World War II. A European democracy of 44 million people, Ukraine now watches as its cities are bombarded by the hour. The death toll continues to rise, whilst refugees flood across the continent, their homes left behind for good as they search desperately for safety.

The global diamond industry is worth tens of billions of dollars, and Russia alone – the world’s leading diamond producer - accounts for around 30% of that market. Almost all Russian diamonds come from Alrosa, the industry’s largest diamond mining company. A third of Alrosa’s shareholding is directly owned by the Russian state, whilst another third is owned by regional governments. Russian diamonds generate roughly $5.2 billion in revenue for the national government of Russia per year, approximately $2.3 billion1 of which is profit. As we speak, this profit is subsidise Putin’s war on Ukraine. Undeniably, Russian diamonds are now conflict diamonds – defined simply by the Kimberley Process as ‘rough diamonds used to finance wars against governments’.

With the aim of isolating Russia economically, condemning its war crimes and striving for the restoration of peace, governments worldwide are continuing to impose a tranche of sanctions. For the US, this has included prohibiting the importation of Russian diamonds - with the EU close on Biden’s tail. However, thanks to a substantial India-shaped loophole, this sanction is expected to have very little impact on the global distribution of Russian diamonds. The majority of Russian diamonds are sold rough, before making their way to India to be cut and polished. As per US customs policy, this is a ‘significant transformation’, subsequently enabling polished diamonds to be imported as an Indian product instead of a Russian one. Meanwhile, no such sanctions have been imposed by the UK at all. As we speak, Russian diamonds are continuing to circulating freely around the world.

We believe that the US should revisit its sanction on Russian diamonds, fortifying its small print to ensure maximum effectiveness; halting the flow of Russian diamonds altogether and ensuring that the Russian government bears the brunt of this blockade. We then urge the UK government to consider following suit, diminishing the opportunities for British jewellers and consumers alike to contribute – whether knowingly or unknowingly – to the conflict in Ukraine.

We also impel jewellers to start thinking more carefully than ever before about the supply chains behind the metals and gemstones that they source. In the context of newly mined materials, this means demanding a full picture; from the mine of origin all the way through the production and trading processes to the finished product. There is no excuse for grey areas; written assurances of origin from trusted certification systems like Canadamark make it easy to trace large sections of these journeys. Traceability is a tool crucial to any consumer or manufacturer who wishes to make informed and compassionate decisions.

Right now, we’re presented with an opportunity to unite as an industry and make a significant difference to the way the world works. The more consistently we ask questions about our supply chains, the more we will see traceability and sustainability embraced as the standard, and the easier it will become for all parties involved to create the necessary changes, ultimately establishing a solid blockchain against conflict materials.

Gleaming metals and sparkling gemstones are miraculous gifts offered up to us by Mother Nature - so often marred by the horror stories behind them. With just a little more vigilance, we can easily ensure that no jewel is any less beautiful on the inside than it is on the surface.
---


About Lebrusan Studio:
Lebrusan Studio is a jewellery brand that prides itself on beautiful design, beautiful craftsmanship and beautiful ethics. We commission only the best craftspeople in the UK and Spain and work solely with precious metals and gemstones that have been sustainably and ethically sourced – because we don’t support exploitation of any sort. The UK’s first ever Fairtrade Gold licensees, we also offer Fairmined Ecological Gold and 100% recycled materials across our collections.