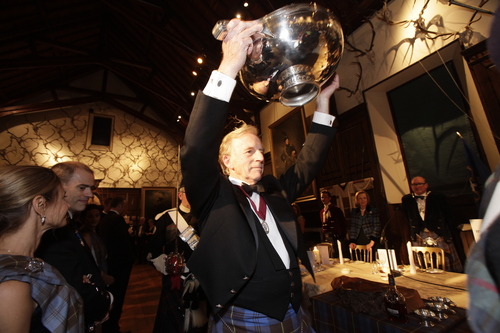 Global celebration of Scotch Whisky
The global success of Scotch Whisky has been celebrated with 44 new members of the Keepers of the Quaich being inducted into the international society at a private ceremony held at Blair Castle in Blair Atholl on Monday 4th April 2022. This is the 63rd Ceremony and Banquet to take place here.

Guests at the prestigious event were addressed by Major General Alastair Bruce OBE. He has been the Governor of Edinburgh Castle since 2019.

“Scotch Whisky was, and remains, the first global spirit and Keepers of the Quaich exists to recognise and celebrate the exceptional contribution of people working in all aspects of the industry, all over the world.” said Ian Smith, Chairman of the Society. “At the ceremony we inducted new Keepers from no less than 15 different countries which demonstrates the continued popularity of Scotch Whisky.”