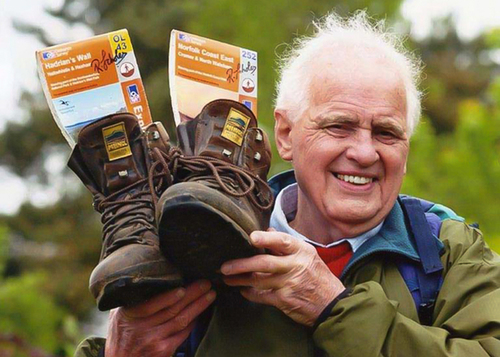 A new book outlining a route along the length of the Pennines range, based on conversations between author Ron Scholes and his friend Alfred Wainwright, is to be published in July.

A Pennine Odyssey - Walks and Ways sets out a route from the Staffordshire/Derbyshire border to the Roman Wall in the north of England. The idea for the route came from the many conversations retired headteacher Ron had with his friend ‘AW’, in which Wainwright talked about a route from the extreme southern end of the Pennine range. Now, 30 years after the legendary fellwalker’s death, his vision is to be published in this pictorial guide.

Ron, who visited Wainwright at his Kendal Green home on a number of occasions after initially corresponding by letter, said: “Wainwright mentioned the ‘purely’ Pennine Way idea in print, but the subject has often been discussed by walkers in the Southern Pennines and further afield. The idea formed the basis for my Pennine Odyssey.

“During his preparatory work for the Peak District Sketchbook in 1983, I took Wainwright to a number of locations in the southern Pennines. He greatly admired the craggy outlines of the Ramshaw Rocks, Hen Cloud and the formidable buttresses of the Roaches.

“After climbing on to the long ridge, walking to Three Shire Heads and happily staring at the impressive limestone profiles of Chrome Hill and Parkhouse Hill in the upper Dove valley, AW agreed that the starting points could be Ashbourne in Derbyshire and Leek in Staffordshire.

“I further added a connecting section from Leek to Dovedale to create the South Pennine Triangle, a mini long-distance walk of 47½ miles and a starter for those who wish to acclimatise to the south Pennines before attempting the whole hog! Thus, A Pennine Odyssey was born.”

The book contains 19 digitised sections of OS maps annotated by Wainwright and his helpers and illustrating parts of the Pennine Way route from Edale to the Roman Wall. The maps include two sections of the Supplementary High-Level Route - a challenging section from Cross Fell to Cold Fell - and contain many fascinating and beautifully printed comments and descriptions by AW. “These are to be read and re-read over and over again - look very carefully as there are some little gems!” said Ron.

A Pennine Odyssey - Walks and Ways is the latest walking guide to be written by Ron, following popular titles such as Walking in Eden: Circular and Linear Routes in the Eden Valley and several in the Landmark Visitors Guides series. In the 1990s, Ron - a Fellow of the Royal Geographical Society - created the Ravenber Way, a 210-mile alternative coast-to-coast walk from Ravenglass in Cumbria to Berwick-upon-Tweed in Northumberland. The book - Coast to Coast on the Ravenber Way - is now in its third edition and includes a foreword by AW’s wife, Betty.

Ron also completed a 1,360-mile trek from Cape Wrath, in north west Scotland, to Land’s End in 1990. Calling it his ‘Long Walk’, he used some of his notes through the Pennines section as a basis for A Pennine Odyssey. Ron has also walked the Cambrian Way through Wales and in 2010 completed a walk from Norfolk to the Roman Wall. He is a near-lifelong member of the Hanliensian Rambling Club, which was formed in the year Ron was born and which he joined in 1945, aged 15.

Ron has also climbed in the Alps and walked in the Himalayas, Andes and Pyrenees and led YHA walking tours in France, Germany, Italy, Holland, Luxembourg and Poland, where his party was once detained by East German border officials after passing through Checkpoint Charlie!

Ron said: “Wainwright believed that people should be encouraged to plan extended walking routes. I benefited from his advice for my own coast to coast journey and certainly on my proposal to walk from Cape Wrath to Land’s End.

“Alfred Wainwright has remained my inspiration. It was a privilege and rewarding experience, chatting and discussing mountain routes, hill and moorland ways, long-distance walking routes and our personal love of maps. I shall always remember the enthusiasm for his beloved Lake District and for his favourite charity, Animal Rescue Cumbria, which I was pleased to support; also his photographic knowledge of valleys, mountain routes, peaks, ridges, and his high regard and enthusiasm for Scotland and the Pennines.

“His Pictorial Guides to the Lakeland Fells, works of art, always came into the conversation, but he always wanted to know about my walks and journeys. In reality, he was a private person, quite unsophisticated; but an individual very much in tune with the qualities of our beautiful countryside.

A Pennine Odyssey - Walks and Ways includes a foreword by Hunter Davies and recollections by Eric Robson, Richard Else and David Johnson. Illustrations are by Colin Bywater and Mark Richards, while hand-drawn route maps are by the author.

The book will be published on July 11 2022 and can be pre-ordered at:
https://www.sigmapress.co.uk/product-page/pennine-odyssey. Ron can also be followed on Facebook and Twitter.

Photo 2: Ron setting off on his walk from Norfolk to Hadrian’s Wall in 2010.
Photo used with kind permission of the Staffordshire Sentinel

A Pennine Odyssey - Walks and Ways will be published by Sigma Press on July 11 2022. It can be pre-ordered at:
https://www.sigmapress.co.uk/product-page/pennine-odyssey

Ron’s previous titles, including Coast to Coast on the Ravenber Way and Walking in Eden are also published by Sigma and are available from Amazon, Waterstones and Abe Books.

To interview Ron or for further details, please contact Rebecca on 07950 060613 or rebecca@rebeccalees.co.uk.