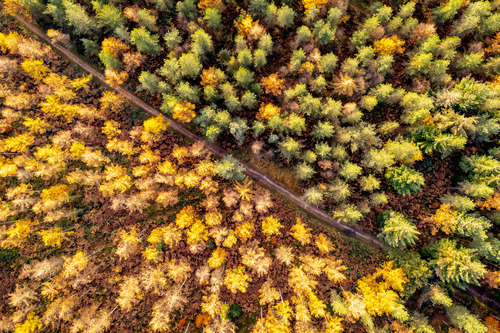 As Britain’s beach resorts prepare to pack away their deckchairs and umbrellas for another year – organisers of the UK’s highly acclaimed new roadtrip route are just getting into gear for their peak season.
The glorious South West 660 drive around the coast of the southwest peninsular is considered to be at its best in the coming autumn months.

The spectacular route around the coast of Dorset, Devon, Cornwall and Somerset has been a massive success with visitors, travelwriters and local businesses since it launched earlier this spring.

Locals say that the amazing 660-mile coastal adventure is even better from September onwards. Visitors can do it all as a once-in-a-lifetime bucket-list treat – or enjoy one of the 12 sections of around 50 miles each.

1
Just look at those trees!
Autumn colours are twice as good when reflected in the waters of estuaries like the Helford in Cornwall or Dart in Devon.
In Somerset it’s the best time to explore ancient woods where Exmoor meets the sea at beautiful points along the South West 660 route, like Dunster and Porlock.
The summer holiday crowds have gone so it’s a great time to wander round the southwest’s sub-tropical coastal gardens too, like those at Abbotsbury in Dorset or Trebor or Trebah and Heligan in Cornwall.
Stay at Kentisbury Grange (www.kentisburygrange.com) set among trees on the edge of Exmoor for some great autumnal walks.

2
Party with the locals
After the summer holiday rush is over the locals have time to join in a glorious sequence of autumn events across the region.
Find food events ranging from Clovelly’s ‘Crab Feast’ and Redruth’s Pasty Festival to The Honey Fair on Bodmin Moor and Seafood Festival in Weymouth. And expect to find cider festivals, demonstrations and tastings all over the westcountry around harvest time.
You might stumble upon annual surprises like the Antiques Fair in the shadow of Dunster Castle, Swanage’s beachside Folk Festival or the huge Taste East Devon Festival of Food in September too. And look out for regular autumn favourites like Bridport Hat Festival, the Black Bream Fishing Festival at Lyme Regis and Port Isaac Book Festival.
Why not stay at Moonfleet Manor (www.moonfleetmanorhotel.co.uk) overlooking the sea just outside Weymouth for the Seafood Festival?

3
Running Free
Let your dogs enjoy the seaside. They are generally allowed on all beaches in the region from September, many of the South West 660’s hotel partners are very dog friendly too. Of course there are plenty of all-year dog-friendly beaches – from the enormous Northam Burrows in North Devon and the little-known Porlock and Bossington Beach in Somerset to the gigantic 18-mile Chesil Beach in Dorset.
At some of the resort beaches like Exmouth and Woolacombe more and more of the beach is open to dog walkers as autumn arrives. At Cornwall’s Perranporth dogs are allowed from the end of August and at protected beaches like Minehead and Falmouth’s Swanpool from the end of September.
The harbourside Greenbank Hotel in Falmouth (www.greenbank-hotel.co.uk) is perfect for an autumnal dog-friendly break along the South West 660.


And 4
So are horses!
You can have a romantic autumn canter through the waves thanks to riding stables at many spots around the coast like Gwithian in Cornwall, Putsborough in Devon and Studland in Dorset.
Stay at The Pig on the beach, Studland in Dorset (www.thepighotel.com/on-the-beach/) – the nearby stables offer rides along the four-mile sandy beach.

5
Time for a walk
The beaches are almost empty and the breeze is fresher - you won’t be able to resist stopping for a coast walk at fantastic scenic stretches of the South West 660 like Lulworth in Dorset, Branscombe in Devon, Roseland in Cornwall and Culbone in Somerset.
Why not park at the remote Hunters Inn on Exmoor and walk down the National Trust’s Heddon Valley to the sea? Or wrap up warm for a bracing cliffwalk to the Lizard Point in Cornwall (calling in at the award-winning Ann’s Pasty Shop on the way back!).
Stay at the Masons Arms, Branscombe, Devon, (https://masonsarms.co.uk) for some great South West Coast Path walking.

6
Into the Wild
Right along the South West 660 route autumn means less people… but more wildlife.
It’s a lovely time to see formations of migrating birds from rocky headlands, go rockpooling on deserted beaches and join guided trips to see the annual deer rutting displays. (Try Arlington in North Devon, Powderham in South Devon, Holnicote in Somerset, Redrice Reserve in Cornwall and Powerstock in Dorset).
It’s the perfect time to take red squirrel tours on Dorset’s Brownsea Island and spot the flocks of wildfowl arrive in the Exe or Torridge Estuaries. Wonder at a mesmerising autumn starling murmuration at dawn or dusk – try the Exe Estuary or Burgh Island in Devon or Marazion or Hayle in Cornwall.
And even when you’re driving along the quiet roads used in the South West 660 route, keep your eye out for badgers, bats, hawks, owls and pheasants – they’re all busily preparing for winter.
Stay at the Marazion Hotel, Marazion, Cornwall (https://marazionhotel.co.uk) overlooking Mount’s Bay for spotting wildlife ranging from whales to rare seabirds.

7
Britain’s Most Spectacular Bonfire Party
Visit the historic market town of Ottery St Mary in East Devon for a bonfire night like no other. After dark, and sometimes fuelled with mulled cider, locals traditionally run through the crowded streets carrying flaming barrels of tar on November 5th. Stand well back – but have smartphones at the ready.
Autumn is also the season for Somerset’s spectacular carnival processions – the biggest and best is at Bridgwater on November 5th.
Stay at Mazzard Farm (www.mazzardfarm.com) for easy access to Ottery’s spectacular Tar Barrel night.

8
The Season of Mellow Fruitfulness
Autumn’s a lovely time to just relax and enjoy the westcountry’s mellowest sights. Gaze into long sunsets across the Atlantic, picnic among hills of bracken and gorse turning crunchy and orange or visit orchards laden with ripe apples. You’ll be able to find mushrooms on grassy clifftops, forage in hedgerows bulging with berries and watch autumn’s bigger waves crash onto sandy surf beaches.
The roads and beaches are quiet but autumn visitors are amazed to find the southwest’s seas are still often warm enough for swimming. Southwest water temperatures in September and October are similar to July.
Nevertheless, it’s the season to consider tucking into heartier local dishes, maybe homemade soup and crusty bread by a crackling pub fire or fish and chips sitting on a harbour wall as darkness falls.
Stay at one of the Original Cottages’ lovely characterful properties to explore the very best of the Dorset and Devon food scene (www.originalcottages.co.uk).

9
Help the local hospitality scene
The South West 660 route has been carefully researched and planned to lead you along the best roads, hugging one of the world’s great coastlines. It passes scores of pretty coves, picturesque fishing villages and romantic valleys.
You’ll find that autumn’s less crowded coastal communities will be more welcoming. You won’t struggle to find a parking spot. Accommodation is more plentiful – and more affordable – and places to eat won’t all be booked up. The bank holiday traffic jams are forgotten and local businesses will be pleased to see you – they’re grateful for your custom to extend their season.
Why not stay at Dart Marina in Dartmouth as the waterside at Dartmouth becomes less crowded in autumn (www.dartmarina.com).

10
Enjoy the drive
Follow the extraordinary varied shores of Cornwall, Devon, Dorset and Somerset and there’s a new sight round every headland.
Tackling the South West 660 is about slow travel. Autumn’s quiet roads give you the chance to relax and enjoy the journey itself. Drive carefully but remind yourself of the lovely old-fashioned thrill of ‘going for a drive’. Of course it helps when you’ve got a great view out the window... And on the South West 660 there are world-class views all the way.
It’s easy to find high quality coastal inns right around the coast of the westcountry (www.staustellbrewery.co.uk/south-west-660).