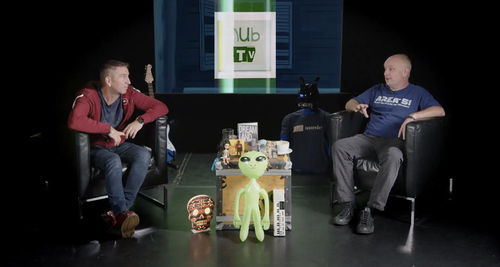 Series 2 of Nub TV is coming to Sky TV Channel 186 (Ayozat) on Tuesdays at 9pm from 8th November!

The first series got rave reviews a cult following and tens of thousands of viewers from all over the UK for its bold and honest approach to investigating the paranormal.

The I newspaper featured the series calling it: “a bizarre mix of music, conspiracies and the paranormal, pushing the boundaries of TV”

As well as featuring the best new music videos we interview our favourite UFO and paranormal experts about the weirdest subjects out there.

The show is presented by Mark Christopher Lee from the indie band The Pocket Gods and Guy Thompson from electro pop band The Boy From Space.

More controversial moments in this series include a scene where Guy and Mark consider contacting the recently deceased Queen on a Ouija board!

Sizzle reel for the series: https://youtu.be/RD3XCLx4_u8

Eastenders’s Nasty Nick (John Altman) talking about the night he stayed in a haunted hotel and woke up with his bed shaking furiously and an orb above floating above him opening up a portal to another dimension!

Ex UK MOD’s Nick Pope talks about the King Charles’s interest in UFO and the possibility of opening up the British X Files!

We also reveal the truth about TikTok time travellers, the English Bigfoot stalking Surrey’s Box Hill and chat with BAFTA award winning filmmaker David Rolfe who is convinced that the Turin Shroud is the real burial cloth of Jesus, and has issued a 1 million GBP challenge to be proved that it’s a fake!
Author Neil Nixon also chats about the UFO experiences both Elvis & John Lennon had.

Alongside we have music from Kick Pistol, Bycycle, The Pocket Gods, Determinated and John Altman!