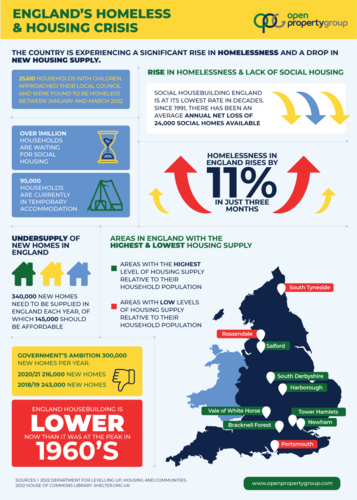 New Open Property Group research found that England is facing both a significant homeless and housing crisis. In England, between January 2022 and March 2022, 74,230 households were found to be homeless, or threatened with becoming homeless.

Out of the 74,230 households who were found to be homeless or threatened with homelessness, 25,610 of these were households with children.

Is the rising cost of living the biggest factor or is it the lack of new housing and social housing supply? Over 1 million households in England are currently waiting for Social Housing and with Social housebuilding in England being at its lowest rate in decades, patterns are starting to emerge.

“The figures surrounding homelessness are more than worrying, especially as they do not reflect the immediate cost of living crisis. It really is a double-pronged attack, with a reduction in available social housing and a crisis in the private rental sector.

In March 2022, a report revealed tenants in the UK spent 42% of their take-home wages on private rent. If you calculated that figure today, it will have risen as rents have become more expensive every month since the report was released. With spiralling energy bills, fuel costs that remain stubbornly high and an Autumn Statement from the Government that points to tax hikes, simply earning a wage isn’t enough to survive.

Even for private sector tenants who are just managing to cover their costs, the threat of homelessness can come from a different source. A recent survey by Cherry Plc found 28% of landlords questioned are planning to sell their properties, with the potential for thousands of tenants to be made homeless. In fact, the loss of a private tenancy is the second leading trigger of homelessness in England.

It is a dangerous cycle to be in. An increasing number of homeless tenants will be chasing a decreasing number of available private rental properties as more landlords look to sell up and exit. Tenants unable to find an alternative place to rent – or find they can’t afford rising rents – will then discover the pitfalls of the social housing sector. A ‘lose-lose’ situation will emerge.

The Government’s forthcoming rent cap in the social housing sector does nothing to address the homelessness crisis as you actually have to be in a property to benefit from the initiative. The focus needs to shift in two directions. Firstly, there needs to be an aggressive social housing build programme, which must include traditional council houses that can be offered to the most in need first.

Secondly, more must be done to keep current landlords in the private rental sector as a supply and demand imbalance creates havoc. When a mass of landlords sell up, it leads to higher rents, less choice and increased homelessness. The Government should reverse some of the punitive landlord measures it has introduced, starting by reinstating mortgage interest tax relief and they should strongly consider scrapping the additional stamp duty bill on second home purchases.” We hope that with more stability in UK bond markets, we will continue to see more competitiveness in bank lending rates, although we anticipate that base rate set by the Bank of England will rise further.”