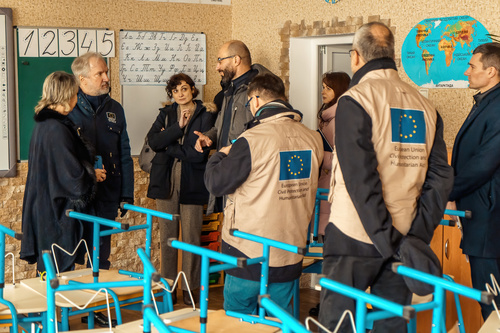 • UNOPS and partners, with support from the European Union, will work with the government of Ukraine to repair more than 40 schools affected by the ongoing conflict.

• The €20 million project will provide safe learning environments to more than 20,000 students

• Damage assessments of the schools to be rehabilitated have already begun across the Chernihiv, Kyiv, Kharkiv, and Sumy regions.


Together with the government of Ukraine, partners, and with the support of the European Union, UNOPS will carry out emergency repairs of over 40 schools across the country.

The ongoing conflict has led to the destruction of much of the country’s infrastructure. This includes public buildings and schools, putting the rights of millions of children to a quality education at risk.

As part of the European Commission’s wider allocation of €100 million to rehabilitate schools across Ukraine, UNOPS has partnered with the EU to implement a €20 million project that aims to provide safe and accessible learning environments to more than 20,000 students.

“By waging its war against Ukraine, Russia is stealing the right of Ukrainian children to learn, to thrive and to reach for their dreams,” said EU Commissioner for Crisis Management, Janez Lenarčič.

“Schools can offer a sense of normalcy, both to children and teachers. With our humanitarian funding to school repairs, we hope to once again provide a safe learning space to children. Because every child deserves access to education, even in war zones,” he added.

UNOPS has already started damage assessments of the schools to be rehabilitated across the Chernihiv, Kyiv, Kharkiv and Sumy regions. The goal is to repair the majority of facilities by September 2023, in time for the new school term.

“As the Secretary-General recently said, the scale of destruction across Ukraine requires strong support from the international community that goes far beyond humanitarian aid. That same community must invest smartly to accelerate reconstruction and use it as a pathway to sustainable development for Ukraine,” explained UNOPS Acting Executive Director, Jens Wandel.

As well as providing safe and accessible learning environments for students in primary and secondary schools, the project will also contribute to improving the working conditions of teachers and school personnel.

“While safety and access to electricity remain a priority, we must not forget that many of the country's children are being denied an education right now,” said Tim Lardner, UNOPS Country Director in Ukraine.

“This will have far reaching effects on the country’s future. Ensuring children can get back into education is an essential part of Ukraine’s effort to rebuild the country,” he continued.