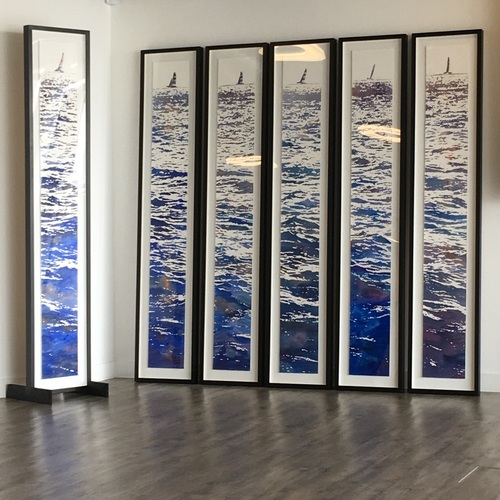 Jeremy Houghton – Olympic and Royal Artist in Residence – is exhibiting in New York in May, as the official artist-in-residence for Land Rover BAR. Land Rover BAR is the British Challenger for the 35th America’s Cup and continuing their journey to bring the Cup home, competing at the Louis Vuitton America’s Cup World Series New York, 6-8th May.

Whilst in New York, Houghton will be showcasing his paintings from his collection of sailing and sporting art. In addition, to mark the 90th birthday celebrations of HM The Queen, Houghton will also be showing works from his time as Royal Artist in Residence for HM The Queen at Windsor Castle.

A specialist in portraying a variety of sports, award-winning Houghton is one of the most collectible artists of his generation. An unparalleled history of international commissions has shaped his artistic career. The following are just some of his sporting associations:

• Official Olympic Artist at the London 2012 Olympic Games
• Artist in Residence for Land Rover Ben Ainslie Racing: Houghton will spend a several weeks with Land Rover BAR visually documenting their quest to win the America’s Cup in Bermuda in 2017.
• Artist in Residence at Goodwood: Houghton is currently Artist in Residence for Lord March at Goodwood, covering the glamourous summer season of speed.
• Official Tour Artist for the Race Against Time: Houghton will be following the three-man British team attempting a 60 day crossing from the Russian Arctic Cape to the geographic North Pole.
• More recently, the James Hunt Foundation has commissioned Houghton to produce the official collection of paintings for the 40th anniversary of James Hunt’s Formula One World Championship in 1976.
• Tour Artist for the 2013 Aston Martin Centenary Tour of Europe.

Houghton’s work is an ongoing study of movement. In addition to sport, he uses themes such as flight, space and time, to depict a broad variety of human endeavours.

Ben Ainslie Racing (BAR) was launched on June 10th 2014 in the presence of Her Royal Highness, The Duchess of Cambridge. The team was conceived by four times Olympic gold medallist and 34th America's Cup winner, Sir Ben Ainslie, with the long-term aim of challenging for Britain and bringing the America's Cup back home to where it all began in 1851. Ben has developed and will lead a British entry capable of winning the prestigious trophy, something Britain has so far never managed to achieve.

Land Rover BAR is a commercial sporting team, with a number of individual private investors alongside corporate partners. The team is made up of some of the best British and international sailors, designers, builders and racing support. Sports teams represent key role models in society. This privileged position is not taken for granted at Land Rover BAR. The team believe our inﬂuence should extend far beyond the race course, and have put sustainability at the heart of operations since launching the team with Exclusive Sustainability Partner 11th Hour Racing, in 2014.

The team has built a new headquarters in the centre of Portsmouth; the 74,000 sq ft. building houses all the team's activities, and will welcome the public into a Visitor Centre hosted by the 1851 Trust. The Trust is the team's ofﬁcial charity, and HRH The Duchess of Cambridge is its Royal Patron. Portsmouth will host a second Louis Vuitton America's Cup World Series event on 21st-24th July 2016. Almost a quarter of a million spectators enjoyed the action in Portsmouth in 2015, with 25,000 of them taking to the water - more are expected to come back in 2016 to watch the racing and cheer for the home team.