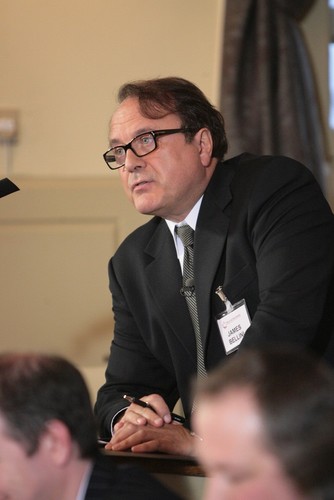 Dr James Bellini, futurologist, author and ex-Newsnight presenter, will bring his considerable experience and expertise to a high-profile debate on Wednesday 11 May between leading proponents of the ŌĆśBrexitŌĆÖ and ŌĆśRemainŌĆÖ camps.

Dr Bellini spent 25 years in the broadcasting industry presenting programmes such as The Money Programme, Newsnight and Panorama, and as a studio presenter with Financial Times Television and Sky News.

Prior to this, he gained a Masters from Cambridge, a PhD from London School of Economics and then became a university teacher, before becoming the first British member of the renowned US-headquartered futurology ŌĆśthink-tankŌĆÖ the Hudson Institute.

Dr BelliniŌĆÖs academic and professional background, and his experience in using the perspectives of history to explore possible futures, give him a unique insight into the consequences of an ŌĆśInŌĆÖ or ŌĆśOutŌĆÖ result in the EU Referendum, to be held on 23 June.

The debate is organised by the UK200Group, the UKŌĆÖs leading membership association of quality-assured independent chartered accountancy and law firms. The UK200GroupŌĆÖs members provide accountancy and legal services to over 150,000 small and medium-sized enterprises (SMEs), and the body is seeking to provide unbiased guidance to the SME community ŌĆō a group whose importance to the UK economy cannot be understated.

The debate is at the centre of the UK200GroupŌĆÖs ŌĆśCampaign for ClarityŌĆÖ, and will be live-streamed from Coventry University London Campus, University House, 109-117 Middlesex St, City of London E1 7JF from 4.30PM to 6.30PM (debate itself 5.00PM to 6.00PM) on 11 May.

Dr Bellini said, ŌĆ£Objective and unbiased information about the potential consequences of the EU referendum can be difficult to find, and the UK200Group must be commended for their foresight in setting up an event to clarify the arguments of both campaigns in a friendly and professional environment.

ŌĆ£By covering the main topics from a business point of view, the group is providing its members with the tools to confidently advise their SME clients, and give them the information they need to make decisions that are in the best interests of their businesses.ŌĆØ

James Abbott, President of the UK200Group, said, ŌĆ£We are thrilled that James Bellini is chairing the ŌĆśCampaign for ClarityŌĆÖ debate, and his unique skill-set will be invaluable.

ŌĆ£The aim is to work through the issues that affect our members and their clients, asking broad questions but also focusing in on specific industries such as agriculture, education, construction, charity and healthcare.ŌĆØ

Dr James Bellini will be joined by the following speakers:

Making the case for exiting the EU will be David Davis MP, the Member of Parliament for Haltemprice & Howden, and an important and consistent voice at the right wing of the Conservative Party.

Although the UK200Group remains impartial and unbiased, a poll of its membersŌĆÖ views will be taken before and after the debate, giving a unique indication of the success of the speakersŌĆÖ arguments and the views of the UK SME community.

This will officially launch the UK200GroupŌĆÖs referendum survey, which will continue to provide real-time analysis of the changing views of SME leaders in the UK. It will continue until the referendum on 23 June.

The UK200Group, which was established in 1986, represents a group of trusted, quality-assured business advisers ŌĆō accountants and lawyers ŌĆō who have over 150,000 SME clients in total. As such, the UK200Group acts as the voice for 1,500 charities, over 10% of all registered academies, more than 3,700 farms, 800 healthcare businesses and over 500 property and construction professionals.

High-resolution imagery is available. Dr Bellini will be available for interviews in advance of the debate.

The UK200Group was formed in 1986, and is the UKŌĆÖs leading association of independent chartered accountants and law firms, with connections around the world.

The association brings together around 150 member offices in the UK with more than 500 partners who serve roughly 150,000 business clients. Its international links in nearly 70 countries give our members access to expertise across the globe.