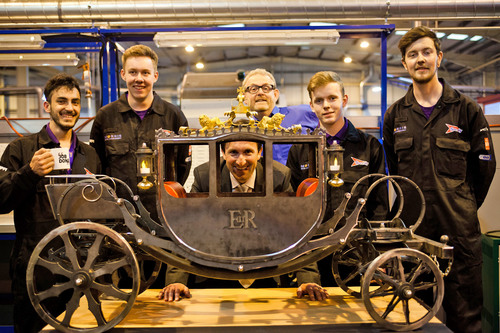 Students from Coleg Cambria in North Wales were crowned the best young welders in Britain after creating a metal replica of the royal carriage to celebrate the Queen’s 90th birthday. The college team won Weld Off 2016 and £3,000 in prizes. The annual contest, hosted by Morris Site Machinery and partners Speedy Services, for welders aged 16 to 26, was on the theme of ‘God Save the Queen.’

Matthew Hughes, Gareth Phillips, Owen Fitzgibbon and Thomas Lavender wowed judges with their model carriage, complete with gilded crown, ornate royal detailing and even a piece of red carpet inside which the Queen herself has stepped on.

Morris Site Machinery, supplier of ArcGen Welding equipment and in association with Speedy, hosted the competition which required four finalist teams of students between the ages of 16- 26 years old from across the UK, to showcase their welding prowess. The competition comprised a Q&A round, a skills section and a creative test which challenged contestants to create an inspiring exhibition piece based on the theme of ‘God Save the Queen’.

Four teams competed in the final at Speedy’s National Distribution Centre in Tamworth.

National business broadcaster, Steph McGovern was a special guest who assisted the judges and gave support to the contestants.

Phil Winnington, Managing Director at Morris Site Machinery, said: “This has been an outstanding year for the Weld-Off and it was a truly competitive atmosphere! Every year the bar is raised and we have been astounded by the level of creativity, quality and interpretation of the theme which celebrates Her Majesty at 90.

“British manufacturing is seeing a renaissance and we wanted a theme which would compliment this. Our competition attracts and uncovers a wealth of talent and skills we have in the UK. This is something we wanted to champion and encourage more young people into engineering to ensure that Britain’s skills base and manufacturing heritage are retained as best as possible.”

Coleg Cambria have won the Weld Off competition for the third year running. The runners up were City of Wolverhampton College who created London’s Tower Bridge replica, Training 2000 students in Lancashire who also welded a Royal Carriage and New College Durham who produced an afternoon tea display in metal.

Jane Nugent, Marketing Director of Speedy Services, the UK’s leading tools, equipment and plant hire services company, said: “Everyone was very impressed with the calibre and creativity of work. The contestants’ work ethic, skill and passion really shone through and all 16 are a real credit to young people in the manufacturing and engineering sectors.”