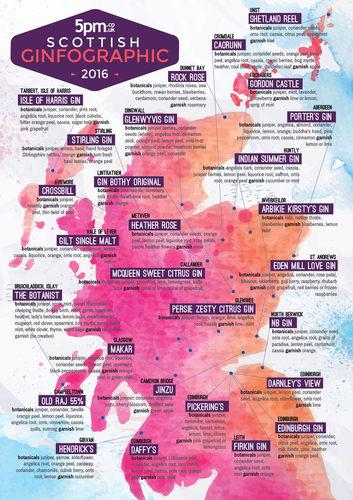 “This World Gin Day we encourage gin lovers to take ginspiration from our Gin Map of Scotland,

A new definitive Gin Map of Scotland has been launched by 5pm.co.uk

The map is a celebration of Scottish gin which has rocketed in popularity in recent years, threatening to overtake whisky as Scotland’s national drink.

In time for World Gin Day on 11th June, the Map aims to encourage gin lovers to be adventurous with their G&T and explore the impressive range of Scottish gins available.

The colourful infographic (or ginfographic) includes the name of the gin, where it is from, its botanicals, and recommended garnishes.

The gins featured include world famous brands such as Hendrick’s to small operations like Jinzu, created by bartender Dee Davies whose Jinzu recipe won a Diageo run competition.

It highlights the creativity and resourcefulness in creating Scottish gin, with botanicals varying from sugar kelp in the Isle of Harris Gin to hand foraged Stirlingshire nettles in the Stirling Gin, with many distillers utilising local produce.

Each gin on the map includes the garnish recommended by the producer to best compliment their gin, with examples ranging from frozen raspberries for Eden Mill Love Gin to kiwi for Shetland Reel gin.

The Map is a 2016 update of last year’s hugely popular 5pm Gin Map of Scotland which was widely shared online.

No longer an artisan fad, gin is a major player in the Scottish economy with gin bringing £1.76bn to the UK economy, 70% of which is produced in Scotland.

Scots drank 29 million litres of gin last year with 42% consumed by 18 to 34 year olds and 27% by over 45s with Edinburgh drinking more gin than any other city in the UK.

Ronnie Somerville, 5pm Founder said: “As a restaurant bookings website, we always enjoy the opportunity to champion Scottish food and drink and Scottish gin has experienced a phenomenal rise recently.”

“With Scotland’s rich history of distilling matched with the best natural larder in the world, the growth of locally created Scottish gin feels like a natural progression.”

“This World Gin Day we encourage gin lovers to take ginspiration from our Gin Map of Scotland, fill up their glass with a cold G&T, and make it a Scottish one.”

Embed the map on your site here

5pm.co.uk was launched in Glasgow in 2001 by restaurateur Ronnie Somerville and businessman Charles Shaw. Originally a restaurant booking website, it has since expanded to offer daily deals, hotels and spa and beauty bookings.

The site also offers consumers the opportunity to read and write reviews. These are real and honest assessments written by customers who have dined at the restaurants reviewed or used the beauty salons in question.