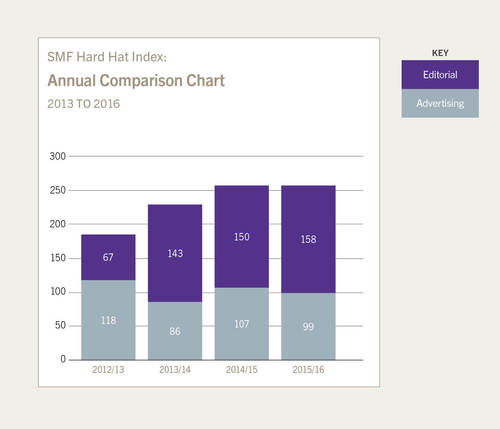 Sainsbury Management Fellows' 2016 Hard Hat Index reveals the resilience of the hard hat as the symbol of engineering. Despite leading figures in the engineering community and engineering students calling for the hard hat to be banned from promotional and educational material, it remains dominant, giving the wrong impression of the role of an engineer according to SMF.

Four years into SMFs’ tracking, the use of hard hats in the engineering media is as high as the previous year’s Index, with 257 images appearing in the 17 titles monitored over 12 months. This figure is also the highest since the Index was launched in 2013.

• Split between advertising and articles: The 257 hard hat images include adverts and articles published in the targeted engineering titles. The overall figure has increased each year and this year’s 257 images represents a 39% rise on the 2013 results.

• Hard Hats more prevalent in articles: Editorial leads the way in its attachment to hard hats. An all time high of 158 hard hats were recorded in this year’s Index, a 5.33% increase over last year. The number of hard hats featured in articles since the Index began has increased exponentially – when comparing 2016 to 2013, there is a 135% increase in hard hat articles.

• Advertising presents a glimmer of hope: While the combined figure for advertising and editorial has not fallen, the use of hard hats in advertising has ebbed and flowed over the four years and this year experienced a decline of 7.47% - 99 hard hat advertisements in 2016, compared to 107 last year.

• Some titles shine: Six publications did not feature hard hats in advertising and editorial during the monitoring period proving that it is possible to present engineering without defaulting to a hard hat.

David Falzani, President of SMF which runs an MBA scholarship scheme for young engineers said, “The Hard Hat Index points out how the engineering community is choosing to represent itself in terms of image and emotional value. Generations Y and X are far more image and brand conscious than before. Image and emotional value are vital in our ability to attract, inspire, recruit and retain bright young people. This is a serious national challenge which we must all embrace.”


ENGINEERING STUDENTS CRITIQUE JOB ADS AND CREATE THEIR OWN BRIEF

To get a deeper understanding of reactions to images in engineering recruitment ads, SMF conducted a workshop with engineering undergraduates. Seventy students competing for an Engineering Leadership Advanced Award from the Royal Academy of Engineering took part in the workshop. The vast majority of the 30 advertisements reviewed fell into the negative category with only 20% of them receiving some positive feedback. The advertisements deemed better did not rely on stereotypical images of engineers, for example, adverts by Dyson and Saudi Aramco.

The engineering undergraduates identified the following image problems, saying many of the ads were uninspiring:

David Falzani concluded, “Engineering professionals, institutions, and students are saying that stereotypical images of engineers need to change. Our Hard Hat Index creates the opportunity for us to keep the debate alive and highlight the downsides of using inappropriate images to represent engineers.”

The following can be found in the Online press room