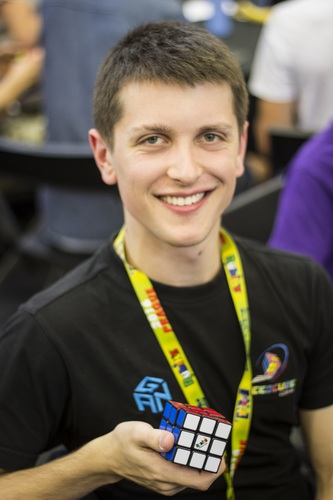 Feliks had the fastest average 3x3 solve time in the competition, averaging 7.07 seconds in the finals.

In a sports hall in Radotín, south-west Prague, hundreds of speedcubers competed to see who would become Europe’s Rubik’s Cube Champion. Two-time World Champion Feliks Zemdegs, although unable to win prizes at the event for European competitors, appeared to have stolen the show by setting new world records in five disciplines:

Philipp Weyer of Germany won the European crown for the 3 x 3 cube with an average solve time of 7.88 seconds on Sunday 18 July. The new European Champion took home the gold medal, a range of Rubik’s prizes and a cash prize of €1,000.

The fastest single solve of the competition was performed by Mats Valk of the Netherlands, who managed to complete the iconic puzzle in a European record 5.13 seconds.

Other notable results were:

• Jakub Kipa of Poland won the feet-only competition with an average time of 33.66 seconds
• Oleg Gritsenko of Russia memorised and solved 19 out of 20 cubes blindfolded in a time of 54 minutes and 34 seconds

There were 18 different events at the 2016 European Rubik’s Cube Championship, including:

Images and B-roll from the 2016 European Rubik’s Cube Championship are available on request.

Film is free for use for publishing, broadcast or social media purposes.