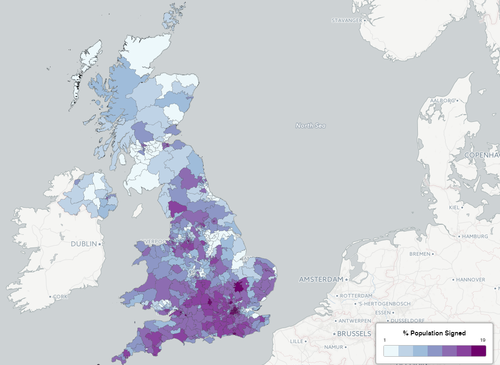 1 in 10 Londoners have signed an online petition calling for a second EU referendum, analysis by digital marketing agency Jellyfish has revealed.

"1 in 10 Londoners have signed an online petition calling for a second EU referendum, analysis by digital marketing agency Jellyfish has revealed."

One month on from the referendum vote, more than four million people have signed the petition, meaning the issue will be debated in Westminster Hall on 5 September.

By analysing data from the official Parliament petitions website, Jellyfish was able to calculate the percentage of the population in each constituency that signed the petition, and an interactive map was created showing which parts of the UK show the most ‘Bregret’.

You can see the map online here

The petition is most popular in major cities in the South of England – unsurprising considering the strong support for ‘remain’ in these locations.

Here are the towns and cities where the second referendum petition was most and least popular:

Hornsey and Wood Green in London was the constituency with the most signatures by population, with 18.59% of constituents signing the petition.

“I still believe that the UK is stronger and more secure in the EU, and I will continue to stand with the people of Hornsey and Wood Green on this issue by voting against invoking Article 50 when a vote is held in parliament.

“Thousands of people have already contacted me about the call for a second referendum and over 3 million people have signed a national petition, which means it will be considered for a Parliamentary debate. I look forward to this debate and the opportunity to highlight the implications of this referendum for the country and for our communities. I hope its conclusions can be worked into Labour’s next manifesto.”

Support in other parts of the UK was not as strong. While 30% of Scots voted to remain in the EU, only 3.5% have signed the petition for a second referendum.

A deeper look into the data shows that the majority (54%) of signatures came from people residing in Conservative controlled constituencies. Labour came in second with 37% of signatures coming from their constituents.

Jellyfish is a global digital marketing agency, with offices in the UK, US and South Africa. The agency’s award-winning combination of technology and talent help it to deliver paid search, SEO, social media, analytics, optimisation, creative and development solutions. Jellyfish delivers full-service digital solutions across a wide range of industries, including property, pharmaceutical, finance and gaming. Its impressive list of clients includes Experian, Under Armour, Fitbit and Channel 5.