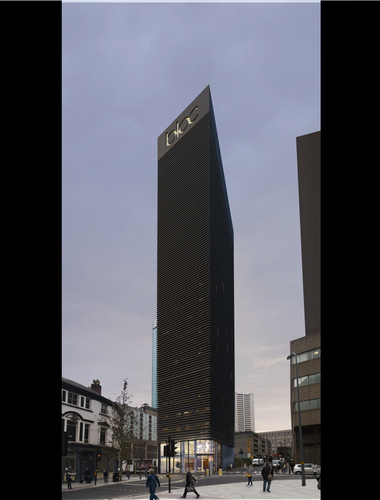 Its construction will help realise Birmingham City Council’s vision of making the Southside district a vibrant and attractive destination for visitors.

Cllr Tahir Ali, the Cabinet Member for Development, Transport and the Economy, said: “The whole area cries out for redevelopment and I think this will act as a catalyst.”

The council member responsible for making Birmingham the enterprise capital of Britain, by growing businesses, creating jobs and improving wages gave his full support for the plans.

While Cllr Dr Barry Henley praised the building as a “tall, elegantly, beautiful designed building”, concluding: “It will be a welcome addition to the city.”

The building is just 50 paces from the iconic Spanish Steps entrance to New Street Station, John Lewis and the Grand Central shopping precinct. BLOC’s flagship 238-room hotel will be built on a site currently occupied by a largely vacant 1960s office block. It will create 40 full-time jobs in the area and support scores more ancillary workers.

The Southside development at 32-34 Hill Street is part of an ongoing multi-million pound investment by the hotel chain in Birmingham city centre.

BLOC are also set to launch their innovative ‘apart-rooms’ for longer stays. Apartment BLOC launches soon at their hotel in the Jewellery Quarter.

“This is a defining movement in the company’s ambitious growth strategy. Our first hotel was in Birmingham and we want to continue to invest in the city that the brand was born in.”

Glenn Howells, of Glenn Howells Architects, said: “We are delighted to be working with fellow Birmingham-based company BLOC Hotels on a bespoke building for the heart of the city.

“The building is situated at an important gateway site within Birmingham City Centre and offers the opportunity to define a benchmark for the future regeneration of this part of the city.”

The Council’s Planning Committee Report praised the development: “The scheme is of the highest quality in terms of architectural form, detail and material. In particular, the facade and top of the building are well considered.

“Moreover, the double height entrance lobby and cafe restaurant would enliven the base of the building and be an attractive destination.”

The BLOC Hotel is based on some fresh thinking. We use clever new design and construction techniques to build hotels with small, chic, perfectly-formed rooms for people who appreciate quality but don’t always need the fuss of a traditional luxury hotel. And without the unnecessary extras, BLOC can keep prices low.

BLOC’s design principles are based on pared-down luxury. So just because you won’t find an over-blown restaurant, spa or conference facility, doesn’t mean you’ll have to compromise on style or a really good night’s sleep. BLOC gives you the best of what you do need and none of what you don’t.