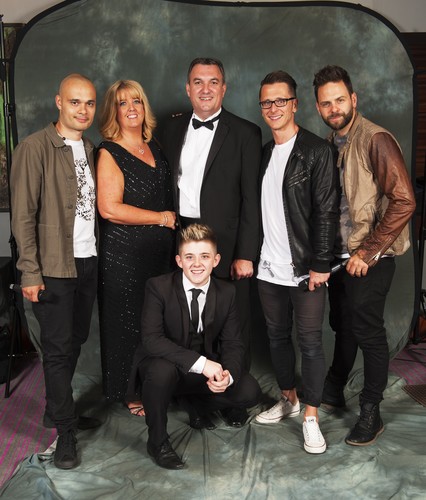 The ball, held at the Glasgow Radisson Blu Hotel, welcomed over 250 guests dressed in their finest black and red attire. The evening started with a dance medley from Glee by the Glasgow Academy of Musical Theatre Arts (GAMTA) which was followed by an exciting auction and luxury raffle. Charity co-founder Grant Currie officially launched Vasculitis Scotland, a support network funded and managed by the Lauren Currie Twilight Foundation.

Grant Currie, who lost his only daughter Lauren to vasculitis six years ago, said, “I was at a meeting with the NHS discussing a way of bringing together all the clinics and consultants to try and improve vasculitis care across Scotland. One thing we didn’t have was a central database of patient information, the type of vasculitis that affects them and their location in Scotland. Vasculitis Scotland is here to help collate that information.

“On top of that, we are creating a community where patients in Scotland can access a lot more information about the support services available to them. We already have support groups in Glasgow, Aberdeen and Edinburgh and we are introducing groups to Inverness and Dundee.

“The funds raised from the Black & Red Ball have gone directly into creating Vasculitis Scotland and also a television commercial to raise public awareness. We are the first vasculitis charity to take vasculitis awareness to that level of exposure. The commercial will be going out across Scotland on STV this week.

“As well as the Vasculitis Scotland initiative, the charity is also holding our first residential self-management course on vasculitis at the stunning Ardoch House in Loch Lomond. Patients will be provided with self-guidance as well as management support for themselves and their carer.

“The charity has also been selected as one of the 40 charity partners for the Nicest Job in Britain initiative, which will help with vasculitis awareness and provide much needed support and guidance in developing our services further.

“This is a great little charity very dear to my heart in memory of someone very, very special.”

The Lauren Currie Twilight Foundation was set up by Kilmarnock-based Grant and Adrienne Currie following the tragic death of their 15-year old daughter and only child Lauren in 2010. Lauren had suffered from Granulomatosis with Polyangiitis (formerly known as Wegener's Granulomatosis), a variant of the auto-immune disease vasculitis. The event celebrated what would have been Lauren’s 21st Birthday.

Lauren's condition was only diagnosed in the final hours of her life and her parents realised that, with earlier diagnosis, her life could have been saved. Vasculitis is uncommon and early diagnosis is an important factor in the effectiveness of medical care. Because of this, public awareness of the condition is one of the charity's main objectives.

The Lauren Currie Twilight Foundation is raising the international profile of vasculitis, and is one of only two vasculitis-specific charities operating in the UK.

Images of the event are available on request.