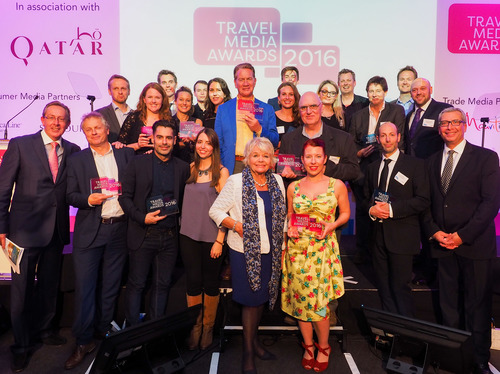 The Travel Media Awards 2016 are pleased to announce this yearâ€™s winners, following a ceremony held at ME London Hotel on Thursday 27 October.

The event was attended by representatives of the UKâ€™s top travel media, with 20 publications, broadcasters, journalists and photographers each collecting a prestigious award.

Matthew Jackson, managing director of APL Media and co-founder of the Awards, said: â€śOnce again, the Travel Media Awards have been a huge success with a remarkably high standard of entries. Our judges had some difficult decisions to make and weâ€™d like to congratulate all the winners and entrants. With over 200 people attending, weâ€™re proud to say the Awards were a great success.â€ť

The Travel Media Awards 2016 were also thrilled to welcome British journalist and broadcaster Michael Portillo, who was presented with the Special Contribution Award. Over the past eight years at the helm of the BBCâ€™s eminently popular Great Railway Journeys series, Portillo has taken viewers along the historic railroads of the United Kingdom and Europe.

The series has run to a total of 12 seasons, an achievement that the organisers and advisory panel of the Awards labelled: â€śA testament to the importance and popularity of the showâ€™s theme, and to Portilloâ€™s intellectual rigor and boundless enthusiasm as a presenterâ€ť.

Co-founder of the Travel Media Awards and Travega managing director Giles Harper said: "Weâ€™re delighted that the awards have grown so substantially year on year, with over 600 entries across all the various categories â€” an increase of some 20% on last year â€” and with many household names now supporting the Awards. Iâ€™d like to thank everyone who entered and attended the Awards, our panel of judges, the Awards sponsors and the entire Travel Media Awards team who have worked so hard to make the Awards such a memorable event."

Online Consumer Travel Publication of the Year
The Telegraph

Travel Broadcast Programme of the Year â€“ TV, Radio, Online
Mark Stratton: Between Life and Death - Toraja People of Sulawesi, BBC From Our Own Correspondent

Travel Guide Book of the Year
Bradt â€“ A Summer of British Wildlife, by James Lowen

The Travel Media Awards are owned and operated under a joint venture agreement between Travega and APL Media Limited. Please note, for the purposes of fairness and transparency, no travel titles by APL Media were entered into the Awards. A team of 9 independent shortlisters narrowed down a final list of four or five in each category before a panel of 55 travel industry and media experts decided the winners. www.travelmediaawards.com

APL Media Limited works across the travel and lifestyle sectors in a number of media, from print through to events. APL Media produces the award-winning National Geographic Traveller (UK) magazine, ABTA Magazine, Destination Vacation, ASTANetwork and a series of lifestyle newspaper supplements, apps and websites. www.aplmedia.co.uk

Travega offers a wide range of travel marketing solutions to companies within both the leisure and business travel sectors, including sponsorship procurement for some of the UK's leading travel industry events, alongside bespoke event creation and third party event management. www.travega.co.uk